No Red Wave, But OMG the Courts

This post is going to be North Carolina-centric, so don't expect comment on races across the nation -- yet. 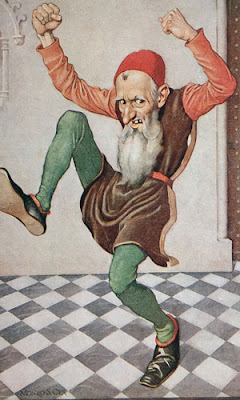 The NC Republican leadership in the General Assembly was very confident that they would win themselves super-majorities in both House and Senate, which they need to tromp all on Gov. Cooper, but that didn't quite happen. The GOP won 2 seats in the Senate, giving themselves a supermajority there of 1 vote, which can override a Roy Cooper veto, but in the NC House -- which also saw a net Republican gain of 2 seats -- the Democratic veto-confirming minority held. (As long as everybody's there and nobody gets sick.)

(I'm so blessed to have Blair Reeves in my morning email!)

The Baddest, Super-Worst News of the Night

Paul Newby's eyes just got brighter with vision and iron purpose, because that little Rumpelstiltskin of far-right jurisprudence will be ruling over a 5-2 Republican State Supreme Court. Both Sam Ervin IV and Lucy Inman lost their court races. So did all four Democrats running for the NC Court of Appeals. The courts will now be where Democratic challenges to power grabs go to die.

(In no particular order. Look, I haven't had much sleep.)

HD73 -- Democrat Diamond Staton-Williams has apparently edged out Republican Brian Echevarria by 425 votes. I gotta eat crow on this one. I didn't give Staton-Williams much credit. For sure, I thought Echevarria would win easily in a red wave, and I sure am glad there was no wave and hope that Staton-Williams' slim margin holds.

HD114 -- One of three new Buncombe Co. districts. Democrat Eric Ager, an incumbent, won with 68% of the vote.

HD63 -- Democratic incumbent Ricky Hurtado, the lone Hispanic in the General Assembly, appears to have lost to former Rep. Stephen Ross by 658 votes. This one hurts.

HD35 -- Democratic incumbent Terence Everitt held on to this seat with 51.7%, despite nasty photoshopped smears.

HD103 -- Democratic newcomer Laura Budd kept the seat in Dem hands with slightly over 52% of the vote. This used to be Rachel Hunt's seat.

HD62 -- Democrat Brandon Gray, who keeps trying, lost to Republican incumbent John Walker, who took just 52%. Gray's young and clearly growing. He improved on his showing against the same incumbent in 2020, cutting down Faircloth's 8,000-vote margin in 2020 to a couple of thousand in 2022.

HD2 -- Democrat Ray Jeffers easily beat incumbent Republican Larry Yarborough, deemed "the most vulnerable Republican in the NC House" (on this blog). This was a genuine flip.

HD20 -- Incumbent Republican Ted Davis turned away the challenge by Democrat Amy DeLoach by 1,000 and change.

HD93 -- Democrat Ben Massey ran a really good campaign against cipher Republican Ray Pickett (full disclosure: I donated to the Massey effort). It wasn't even close (thank you, gerrymandering), so naturally the preternaturally lazy Ray Pickett scarcely campaigned at all.

HD119 -- Democrat Al Platt, for whom I'd become a fan, lost his challenge against Republican incumbent (and Oathkeeper adjacent) Mike Clampitt.

HD50 -- Democrat Renee Price easily kept this seat in Democratic hands. It was her primary back in May that caught my interest.

HD45 -- Democrat Frances Jackson (finally) won a seat, an open one considered "safe" for Democrats. I  noticed the primary in May, because whoever won that was gonna win the seat.

HD33 -- Another safe Democratic seat, won for reelection by Rosa Gill. I noticed her primary last May.

HD74 -- Democrat Carla Catalan Day, who would have been the second Hispanic elected to the House, lost to Republican incumbent Jeff Zenger.

HD112 -- Democrat Tricia Cotham easily regained a seat in the House after voluntarily stepping down in 2016 to run for another office.

HD42 -- Democratic incumbent Marvin Lucas buried his token R opponent. I noticed his primary mainly because he had a Muslim woman running against him in May.

HD66 -- As expected, used-to-be-state-senator Sarah Crawford opted to run for this easy D win. She also had weak Dems against her in the primary.

SD18 -- This is the seat Sarah Crawford put in peril by deciding to jump to a House race, now R+1. But Democrat Mary Wills Bode pulled it out against an increasingly toxic E.C. Sykes with 51.15% of the vote.

SD19 -- Roy Cooper's daring gambit of actively campaigning against incumbent Democrat Kirk deViere back before the primary paid off. Democrat Val Applewhite won with 52.52%. Maybe former Republican incumbent Wesley Meredith, who was trying again to regain his lost seat, will go off and auction something.

I became very interested in the Democratic energy that had sprouted this year in Transylvania Co. I particularly noticed the campaign of Lauren Wise for Transylvania Co. Commish. He came up short but made a respectable showing, trailing the 2nd of two Republicans who won by just a thousand votes.

More disturbingly, two Republicans for school board, described as "vampire candidates," won. And I'm glad to report here -- by punishing contrast -- that the three progressive school board candidates in Watauga all won reelection.

Posted by J.W. Williamson at 11/09/2022 09:15:00 AM
Email ThisBlogThis!Share to TwitterShare to FacebookShare to Pinterest