A Rising Republican Star in HD73 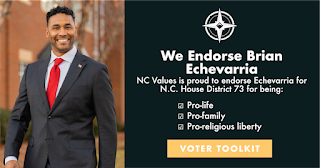 My attention was drawn this morning to Brian Echevarria, the Republican candidate for the NC House Dist. 73. The name is Cuban, and you need to pronounce it using all five syllables. He was outed first by Carolina Forward as having previously owned a lively (now supposedly scandalous) Facebook page, Spank That Tail, that advocated, sometimes quite humorously, for more corporal punishment for children, especially those caught “twerking” and not going to church. Especially not going to church.

The Charlotte Observer picked up the story, followed by the Raleigh News and Observer, where I saw it a couple of hours ago. Apparently, the now defunct "Spank That Tail" FB page "linked to a website, spankthattail.com, which is inactive. Documents from the N.C. Secretary of State’s Office also show Echevarria as the registered agent of a business called Spank That Tail, LLC. The business formed in December 2014. It was administratively dissolved in 2016."

From what I've now seen of candidate Brian Echevarria, I'm frankly astounded by the way he's handling this meh revelation. He was defensive with the Charlotte Observer -- "it was all joke" -- when clearly it was not a joke but an actual stab at a new business. Was he planning to market wooden paddles? He brags on his website that marketing is his super-power, so it tracks.

I'm surprised that the Echevarria I've been watching on video didn't immediately throw it back in the media's face. I'm surprised he wasn't proud of that funny but marketable entrepreneurship.

I grew up with corporal punishment. I had an outbreak of temper tantrums when I was 5. My mother sent me on regular errands to the backyard peach tree. "You break me off a keen limb and bring it back here." Those lessons stuck, and the welts went away. Everyone in that culture believed in and practiced spanking, because in West Texas, if you had boys, you had potential furniture breakage and an eye put out from the constant rough-housing. I had an older brother who was irritated with my presence. Because I was irritating. I was a master of irritation. Sorry, but some of us need a good spanking.

I had to go take a closer look at this guy Echevarria. I found out immediately that he can talk. Not just the perpetual yammer of politics but logical, clear, complex sentences spoken by someone born (or made?) for the microphone. He's got an engaging personality -- all brightness and the joy from knowing he's unimpeachably right -- and the kind of slick delivery that suggests he learned it in church. He's a born preacher, a persuader, a marketeer indeed, but his is not like the preaching of bully Mark Robinson. Echevarria is more on the Ted Talk end of that spectrum than the hellfire and sarcasm end that Robinson occupies.

Echevarria is famous for delivering 3 minutes of a blistering takedown of what he'd heard about CRT (which he clearly didn't really understand), in front of the Cabarrus County School Board. The board members were over-matched by Echevarria. They had already shown cracks in the masks policy for school (it was mid-February of this year, after all, when most people were just giving up and giving in to the idea of catching COVID), and I believe Echevarria, who had many in the audience nodding their heads, laughing at his fluency, and applauding him, I believe he simply cowed that school board. (The video, which went viral and got a write-up in the New York Post, can be seen on his website.)

I totally get Echevarria's point, though I think it's based on a myth, a misunderstanding of history mixed with an understandable defensiveness, and I can't accept that basis. Though I get it why a multi-racial man with an accomplished wife and three kids in the rural South might push back:

He didn't get recruited by Republican leaders to run for office based on the viral spread of that video, because the speech in front of the Board of Education came last February, and he had already filed to run in December. I know not whether he was recruited or launched this on his own, but his speech on CRT produced a stunning political debut, and he's clearly riding it like a stallion. I'm reminded of his obsession with "the marketplace." He's vague about his "many businesses" and how he makes his living, Linked In says he's a financial advisor (Consolidated Planning Inc., but only since July of this year). I think he's tried many enterprises but at some point understood that his real product is himself, and he's pretty good at selling.

He's a hustler, maybe not in the wholly negative sense that Judge Judy means when she uses the word, but he strikes me as a person on the street who can convince "less skillful players" into competing at a gambling game that he's always going to win. If he makes it to the NC House, he'll rise faster than Mark Robinson and will make more sense. And that's a frightening prospect. 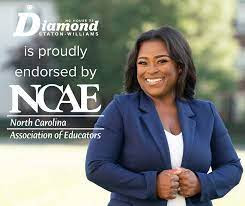 House District 73 is brand new after the most recent redistricting. NCFree, which leans right, rates it R + 5, but Dave's Redistricting gives a very slight edge to Democrats: 49.5% v. 47.8% Republican.

HD73 is an open seat. The Democrat running, another first-time candidate upon whom some considerable hope has been pinned, Diamond Staton-Williams, is a member of the Harrisburg Town Council and a nurse, an evidently single mom with three kids, and her personal story is as up-by-her-own-bootstraps as Echevarria's, but her buttoned-down campaign also seems over-matched. She is endorsed by Lillian's List.

She's not got any candidate video that I've found, but she was interviewed by J D Wooten for his "Carolina Democracy" podcast.

Posted by J.W. Williamson at 10/05/2022 11:52:00 AM
Email ThisBlogThis!Share to TwitterShare to FacebookShare to Pinterest
Labels: Brian Echevarria, Diamond Staton-Williams

Seems like a nice guy. Imagine a candidate being pro-family and pro-religious liberty.

If Echevarria is pro-gun and anti-big government, he could be a winner.

A liar and hypocrite is also acceptable qualification for republicans. In addition to facist, white nationalists.

"If he makes it to the NC House, he'll rise faster than Mark Robinson and will make more sense. And that's a frightening prospect." JW

Why is making more sense than Robinson a frightening prospect?

Shouldn't we have politicians who make sense?

That "sense" I'm talking about is nothing I believe in or want to participate in, because I see where it ends up logically.

Welcome to my world...

I'm sure this will turn out well.

You know, unlimited freedom, wealth, growth and opportunity, with healthy happy people no longer under the yoke of the white minority trying to bring them into the 21st century.

You've sure got a thing for colonialism, which I guess never did anything wrong. And blaming the failures of formerly colonized black nations on the fact of their blackness is just plain gross. Why don't you join the rest of us in the 21st century?

OK, what is the reason for the failure of the formerly black nations?

The tremendous resources, which are so vital to the world? The year-round growing season?

You know, Wolfie, seeing as how you're such an intellectual (according to Williamson), I should think you'd know that a history of colonialism would have something significant to do with the failures. But you can't see past your, yes, racist assumptions. And speaking of Williamson, I don't know why he continues to post your shit.

I never claimed to be an intellectual. JW's opinion is just that.

I realize it's much easier to blame the colonizers than to consider what the real problem is, which is what I asked you.

The white South Africans will be extirpated or exiled. Watch what happens to the country after they're gone.

Africa is not the only place with severe problems of poverty, abuse, starvation and violence. South America is totally forgotten except for the people fleeing every country south of the Rio Grande. They have tremendous natural resources, why aren't they prosperous?

Why does the left ignore the problems blacks have, even in this country? They murder and abuse each other in tremendous numbers in the most liberal of cities. Why?

I do notice when a man of color is doing well in an election with white voters you say he's a liar and a hypocrite.

This is JW's blog, if he sees fit to ban me, that's his right.

That would also be much easier for you than to answer any hard questions.