The Republican Primary in HD63: Which GOPer Will Challenge Ricky Hurtado? 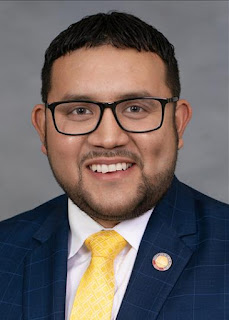 2020 was a difficult year for Democrats in North Carolina. Some of the 2018 Democratic gains in the General Assembly got chiseled away, and some of the gains we expected in Trump's downfall just didn't materialize. Heart-breakers all over the map. Except in NC House District 63, where Ricky Hurtado, the son of working class immigrants from El Salvador, beat the Republican incumbent, Stephen Ross, a Wells-Fargo executive. I believe the 63rd was the only House seat in 2020 to flip to blue.

Hurtado was sworn in as the sole LatinX rep in the House, at least the first and only for the Democrats. I've seen lots of photos of him -- that toothy broad smile -- and a couple of videos -- his origin story on the homepage of his website stands out. His personal history and the way he talks about what he sees as the reality for rural working-class families -- he obviously has a clear, no nonsense mind looking to investigate what America is and how one might go about improving that.

The Democratic minority in the NC House has little power ... except for sustaining the governor's veto, which is no small thing. But the legislation any Democrat writes gets shit-canned in the Rules Committee, which is exactly what happened to two bills that Hurtado sponsored -- setting a minimum wage of $15/hr for "noncertified school employees" and the bill to adopt the ERA. If the Democrats ever get back into the majority -- and even if not -- Hurtado can be a thought leader there if the voters of Alamance County can get him reelected.

HD63 takes up a large chunk of northeastern Alamance County. It was "lean Republican" before the last maps got approved. Now it's "lean Democrat." Dave's Redistricting scores it at 51.2% Democratic to 46.8% Republican. Hurtado took it by a hair in 2020 before redistricting, by 477 votes. When Erica McAdoo ran against the incumbent Republican in 2018, she came within 300 votes of beating him.

That "incumbent Republican," Stephen Ross, may be matched again against Hurtado, depending on who comes out of this primary. But, surely it'll be Ross. 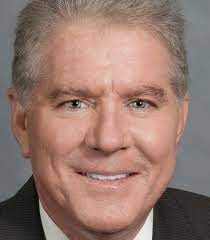 His pitch is all about fighting the radical binge of the Democrats -- "stop the shut-downs and mandates" (the Trumpy gospel of "the pandemic is made up" so no need for these precautions) and "fight for parents’ rights in their children’s education" (mainly the right to censor what kids read, especially if it raises uncomfortable questions about American history, so let's just never talk about slavery and racial justice evah).

This Twitter account of his is moribund. Nothing's been posted since June of 2021. But clearly he's a main street, Chamber of Commerce, country clubbing establishment Republican in a year he'd best not admit it -- not with the Trumpists looking to take more scalps. So Ross strikes a strident pose, supposedly ready to do fierce battle against the socialists.

He opposes the expansion of Medicaid insurance for 600,000 uninsured North Carolinians. In saying so, he exposed the dead heart of the well-to-do conservative Republican. He actually explained, to Bill O'Neil of WXII, why, if it would be too late to help some people, why do anything at all?

"I think that what most people don't understand, even if you were to expand Medicaid right now, the actual benefits wouldn't reach North Carolina until well after the pandemic is [over]," Ross said "We need to be real clear about that." 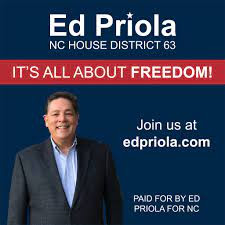 If you're looking for a loud, bare-knuckled crusader against "socialist tyranny" and "Marxist" conspiracies galore, you've found him in Ed Priola. As the public affairs director of the Victims of Communism Memorial Foundation, "he reminded Americans about the crimes of socialism and the deceit of socialist propaganda." He actually says -- not making this up -- that he's a true believer in American exceptionalism and only wants fellow true believers to hold office. Just unpack that for a minute.

This seems like Priola's basest credo, in a letter to the editor: "Many people reasonably believe that 'equity' means 'equality' .... [but] equity is short-hand for Marxist 'social equity,' whose goal is 'equality of outcome' " (The Times-News). Therefore, we do nothing about equity, and you better not even say the word.

The dive-bombing American eagle logo on his website -- eagle clutching an American flag -- looks straight out of 1933 Germany, save for the animal mascot and that particular flag -- the representation of belligerent nationalism. Curiously, he seems to have started in politics as a Ronald Reagan fiscal conservative, but he's veered hard right. He hasn't posted anything to his Twitter feed since December 8th. He says he's a college professor on his website but doesn't say where. That kind of intentional vagueness always pricks my curiosity. In Priola's case, I can't confirm a lot of what he claims. He says he has a doctorate in management. Another site sez he was active up north in conservative advocacy groups, as national field director for the National Taxpayers Union and field director for U.S. Term Limits. He also says he "trained hundreds of Republican candidates running for office across North Carolina." There is evidence on his FB page that he participated in three training sessions for Wake County Republican candidates, but I don't see hundreds. What sort of campaign craft is he expert in?

He ran for state office twice before, two different seats in the Maryland House of Delegates, unsuccessfully, in 1994 and again in 2010. One Maryland blogger characterizes Priola as a "professional activist" for conservative causes, but none of that actual political history is mentioned on Priola's current website.

He's photographed with Lt. Gov. Mark Robinson, and he obviously shares Robinson's crackpot ideas about indoctrination. Priola was one of the Robinson supporters who stormed the Alamance School Board meeting at the end of last June, and he certainly likes to sound scholarly: “Critical race theory is not science – it’s garbage propaganda,” he said to the board in the public comment period. “It’s based in the Frankfurt School – a Marxist think tank in the 1930s,” he said, referring to a school of social theory and philosophy which had been associated with the Institute of Goethe University in Germany prior to World War II and centered on criticism of capitalism (and other economic systems) and finding alternatives to create an ideal society, according to Encyclopedia Britannica. “They were forced out by the Nazis,” and came to the U.S., where they infiltrated academia, Priola said, urging school board members to investigate what’s being taught in ABSS classrooms.

My Gawd. There's no arguing with a conspiracy theorist who can quote the Frankfurt School.