Lauren Wise is about as qualified as a county commission candidate can be. He's served on the Transylvania Co planning board for five years, currently as its chair. He's an architect and clearly has an eye for planning and long-range policy. He's been a bridge-builder and consensus leader on the planning board -- which is majority Republican -- but Wise has reputedly gotten unanimous recommendations out of them. Which then promptly die in the hands of hard-right county commissioners.

For example, in 2017 a new comprehensive plan for Transylvania identified a stretch of US 276 in the southeastern part of the county known as Cedar Mountain, bordering Henderson Co and South Carolina (the area contains the DuPont State Forest; its "heart" is some 20 minutes from the county seat of Brevard) -- someone with development stars in his eyes put his thumb on Cedar Mountain and declared it a "Designated Growth Area/Commercial Node."
The whole area is "without public water and sewer" and its long-time residents went gulp at the idea of being transformed by devil-take-the-hindmost commercial development (hello, Pigeon Forge), so they petitioned the county commission with a comprehensive plan of their own, a plan championed by Lauren Wise which would carefully limit different types of development, and encourage other including affordable workforce housing, none of which has to negatively impact historical and cultural norms. Some stuck-in-the-mud and beholden-to-special-interest Republicans on the county commish went "eek, zoning!" and tabled any further consideration of the plan in October 2021. And there it rests.

Is Lauren Wise going to run into the "zoning" buzzsaw that has ruined so many political movements in rural counties? 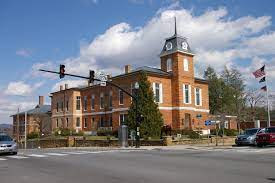 The historic Transylvania Courthouse was built in the 1870s and has been outrageously neglected by skinflint Republican commissioners who have been much more married to low taxes (the only issue they care about) than they are to historic preservation. Apparently the place is not only run-down but dangerously run-down, with some plaster ceilings prone to collapse. That's according to a letter of official complaint that a senior judge addressed to the county commission. He outlined outdated design and cramped conditions "that allow close contact between, for example, accused criminals and the people they are accused of victimizing." Did the commish take action? No, another prime example of why change is needed in Transylvania County, according to Lauren Wise.
In 2018 a bond issue authorizing some $68 million "to pay the capital costs of constructing, improving, renovating and equipping school facilities" easily passed in Transylvania County, and Democrat Wise is campaigning against Republican dilly-dallying over using that bond:

“Commissioners have spent the four years since this voter-approved bond issue passed collecting taxes, stalling contract negotiations, questioning the ability of voters to understand the complexity of the issue . . . and suggesting that Clark Nexsen, one of the most respected school architects in the country, is somehow fleecing our county with fees,” Wise has said.

“They have done everything possible not to move forward.”

It's a pattern of conservative foot-dragging all too familiar, especially when it comes to building tax-supported infrastructure for the good of the wider community instead of services for purely commercial interests.
It would be a huge indication of changing plate tectonics if Lauren Wise were to win this race. And no big surprise if he doesn't.
Two seats are open on the commission. Three candidates are running -- two Republicans (one an incumbent) and Wise. Two of the three will be elected.
Posted by J.W. Williamson at 10/03/2022 07:24:00 AM
Email ThisBlogThis!Share to TwitterShare to FacebookShare to Pinterest
Labels: Lauren Wise, Transylvania County