The Democratic Primary in HD50

The new NC House District 50 includes all of Caswell County on the Virginia state line, then south through most of Orange County (county seat: Hillsborough) but does not include a block in the southeast corner which happens to be Chapel Hill (in its own HD56, where another interesting Democratic primary is taking place). HD50 is solidly Democratic soil: Graig Meyer has repped it in the House, Valerie Foushee in the Senate. They are both running for higher offices this year, leaving HD50 an open seat.

If this primary doesn't speak symbolically of the progressive South -- LGBTQ+ man v. Black woman -- I don't know what other matchup could do it as comprehensively.

Renee Price, currently serving her third term on the Orange County Board of County Commissioners, as chair. 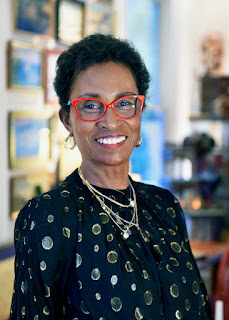 Price had initially announced last November that she would run for the Senate seat Valerie Foushee was leaving, which also happened to be the higher office Rep. Graig Meyer was seeking, so Renee graciously stepped aside and ran instead for the House seat Meyer is leaving.

Educated at Tufts and Cornell, Price earned a Master's degree in regional planning, with concentrations in city development, environmental planning, and design. She got into politics in the Orange County Democratic Party. She admits to being a shy person who was talked into running for county commission in 2010. She lost but she came back in two years to win, which she's continued do through two reelections.

“My elders taught me to hold fast to freedom, never to take a defeatist attitude, respect all people, stand for justice, and persevere with humility,” Price wrote. “At the founding of the United States, ‘we, the people’ excluded women, people of color, and men without property. Today, ‘we, the people’ is inclusive; we vote, run for office, and have seats at the table. Still, we must strive for the realization of democracy, equality, prosperity, wellness, and justice.”

She's pragmatic about working with Republican colleagues: "I just noticed this past weekend, maybe it’s changing, but if you wanted to talk to a Republican about health care, you wouldn’t say 'Medicaid expansion.' We knew that talking about expansion was going to get us nowhere. So we didn’t. But when you get down into the nitty gritty, OK, how do we save rural hospitals? How do we come up with a way to save rural hospitals or come up with a way to make sure that everybody has health insurance or access to health care? If you want to put another label on it, I’m fine with that."

She's very active on Facebook, has launched a "Walk with Renee" volunteer program to door-knock neighborhoods, and NC Poet Laureate Jaki Shelton Green is doing a fundraiser for her. But so far, Price hasn't gotten the hang of Twitter.

Matt Hughes, LGBTQ+ activist, member of the DNC, and chair of the Orange County Democratic Party. 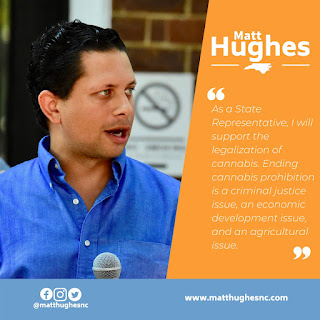 He traces his family's roots back in Orange County to the 1760s. As a child he was a delayed speaker. He credits Gov. Jim Hunt's Smart Start initiative in schools for intervening and helping him learn how to speak through special speech pathology treatments. He's now very much a spokesman.

He was a leader in student government in his Hillsborough high school, went to Chapel Hill as a first generation college student, earned his bachelor's (poly sci) and his master's (public administration), and makes a living now as a political policy activist. He's finance director for Blueprint North Carolina, a 501(c)(3) which is "strictly prohibited from participating or intervening in any political campaign on behalf of or in opposition to any candidate for public office" but which is very involved nevertheless in voter mobilization (including registration drives and get-out-the-vote) around policy issues. "All Blueprint activities will be strictly non-partisan. In addition, Blueprint activities will not be coordinated with any candidate, political party or other partisan entity." Uh-huh.

This is not Matt Hughes's first run for public office. He tried in 2016 to get on the Orange Co. Commish, ran in the Democratic primary (but not against Renee Price), and lost. As Party chair, he became effective at getting out the vote and in 2018 he was appointed to a seat on the Hillsborough Bd. of Commish. He won a 4-year term in his own right in 2019.

From his filing statement: “We need a new generation of leadership that’s not afraid to lead boldly and think big,” said Hughes. “This new generation must not only fight against radical Republicans and their attacks on our way of life, including our precious democracy, but push for solutions that will benefit all who call North Carolina home. I’m running because I believe in a North Carolina that lives up to its ideals and is a state where its people are healthier, safer, better educated, and has more money in their pockets.”

NOTE: There is a Republican on the ballot for the November election, Charles Lopez. He looks like a sacrifice.

Posted by J.W. Williamson at 3/12/2022 10:09:00 AM
Email ThisBlogThis!Share to TwitterShare to FacebookShare to Pinterest
Labels: Matt Hughes, Renee Price