What Made Watauga So Dark Green? 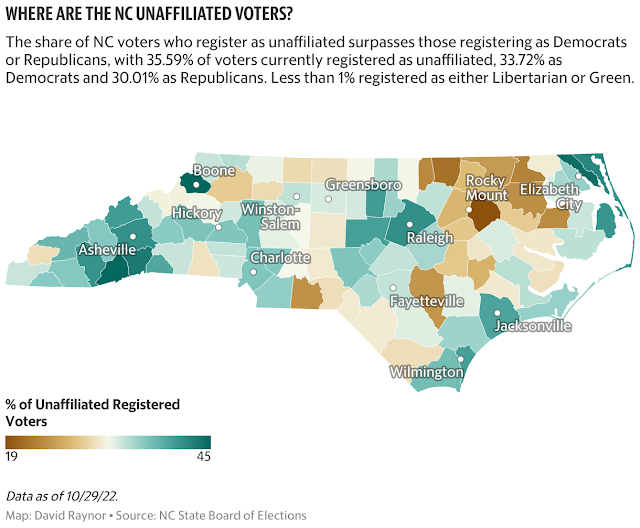 Clearly, from the shading alone, Watauga County has the biggest proportion of voters registered Unaffiliated. We already knew that, but it's startling to see it depicted in color, right next to all those pale tan counties also in Virginia Foxx's congressional district.

Posted by J.W. Williamson at 11/04/2022 08:55:00 AM
Email ThisBlogThis!Share to TwitterShare to FacebookShare to Pinterest
Labels: Watauga County

What made Watauga so dark green?

It should be, what is making Watauga more independent? I've lived here for over forty years. I've seen alot of changes in that time, some good, but mostly bad.

At that time Boone was a quaint small college town. I had, and still have, a ton of relatives in the surrounding counties. One thing that struck me the most when I arrived was the varied and vibrant economic base, the strong Appalachian culture, and what I call the 'ease of living'.

I was born in what was at one time the wealthiest county in the nation, and yet every time I came here as a child to visit relatives, I saw that they were actually the wealthy ones.

But most of that is now gone.

Politics is a virus; it infects healthy communities like a disease; it spreads poverty, hatred, force, and division.

Shortly after I moved here, I noticed there was a concerted, continuous and powerful push to make NC a modern liberal state.

And I mean a modern liberal state in a pejorative way. The politics changed dramatically.

I reckon 90% of the problems people face are due to politicians and politics. Look at our economy, our society, our lack of freedom.

Of the other 10%, most of it is personal decisions, life choices. There are some natural problems of course, weather, disease, accidents, but the bulk of our problems are caused by politicians and politics.

So, I believe there is a latent but growing resentment against politics, and especially POLITICIANS and their cronies.

Politicians use emotion and rhetoric to divide and control people for their own benefit, either power, wealth or the furtherance of their own ideology over others by force.

Folks no longer want to be divided into democrat or republican, many want to live their lives and raise their families as they see fit and be LEFT THE F**CK ALONE!

But that doesn't sit well with republicans or democrats, does it?

Goodness gracious! Wolf's Head. I hadn't realized what a romantic you are. Fondly recalling a Golden Age of no politics, when all was peace and kindness and good living.

You realize that as soon as Adam and Eve had a son-in-law, there was politics. What are politics but diverging and conflicting interests? There have always been politics because diverging interests want to convince others of their point of view. That's not corrupt. That's human nature.

So your romanticism about a previous politics-free golden age is overlaid with a really violent hatred of politicians that must conceal a painful personal story. Who licked the ice cream off your cone. You [all caps] want to be left the fuck alone, but you come to this site out of your own volition and pick numerous fights. So I'm not at all convinced that you want to be left alone.

It one thing to convince others of your point of view, it's another to force them to conform.

Politics will never allow you to be left alone. Even the most reclusive of hermits will find out when he goes into town on his yearly supply run for ham hocks, gunpowder and guitar strings that his money has been inflated, ham hocks are in short supply due to lack of fuel, guitar strings are now made in China, and he has been placed on a terrorist watch list for buying gunpowder.

It wasn't that an earlier time was free of politics, it was that government was far, far smaller and had less of an impact in everyday life. People had more freedom and kept more of their hard-earned money. Foks had a good standard of living. They could raise their children in a home they owned, send them to college and have decent retirement on ONE income.

Now politicians, especially the left, want to control nearly everything in people's lives, and that takes money. So, they take it from the workers who find their standard of living has declined dramatically.

Now, politicians send billions of taxpayer dollars overseas, often to our enemies. They cut us off from using a vital natural resource, oil, which is the fuel that provides us with everything. They devalue the money in our wallets, bank accounts and retirements through profligate borrowing and spending. They tax our labor to further their political power and leave families struggling as they are robbed by inflation the politicians caused.

As for posting here, as I said before, I do it to show you and your readers that there is an opposing point of view, and that may explain the increase in unaffiliated voters. Apparently, they do not share your politics, just as I don't.

Next Tuesday we'll find out.

And when a group is working to harm one's life and wellbeing, and that of his country, what else can you do but oppose it? Even if it is only a rant on a local blog?

I forgot to add a thank you to JW, who allows my posts here.

I realize that posting here opens myself to ridicule and abuse, and perhaps he allows my posts to entertain his readership and give them a good laugh.

However much JW and I disagree on nearly everything, I do respect him for posting my opposing views.

Politics is just war by another means, to paraphrase Von Clausewitz.

Hound Dog wandered into the Blowing Rock Post Office to discover his Social Security check had been cut off. We could hear the howling all the way up at Tweetsie.

Wolf's Head. I wanted you to know I very much enjoy your posts. I actually agree with more of your assertions and analysis than you might think, and I always like hearing different philosophies as a rule anyhow. It keeps me grounded (although many would argue, I guess, that I'm not grounded in any way whatsoever). But I really don't care and suspect you don't either. Anyhow, thanks for writing here and sharing your perspectives. Whether we agree or disagree on any given issue, I like the back and forth. --Pam Williamson

Thank you for the kind words.

They are too few in these times.