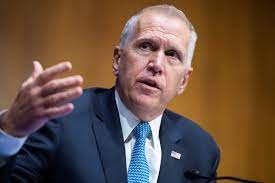 The establishment Republican publication, Carolina Journal, published Sen. Thom Tillis's response to a question posed to him in a Zoom press availability -- would he support Trump's newest announcement for the presidency? Tillis said he would "wait and see."

As in "wait for the inevitable indictments" and "see whether the sun still comes up in the morning"?

Wait and see. It's definitely a signal of a cooling off, especially when Tillis went further, hinting that maybe unto us another political savior has been born in Florida: “We’ve seen a number of people in the Republican Party emerge as leaders. Maybe you should take the time to see who will come out and build a message that we think resonates best with the American people.”

Tillis famously broke with Trump over using an emergency declaration to move other budget money into paying for the Mexican wall and very quickly repented that, earning Trump's endorsement in the 2020 Senate race against Cal Cunningham. Tillis appeared at Trump rallies during that campaign and probably benefitted from the endorsement, though the Trumpist wing of the party remains suspicious of if not outright hostile to him. He seems now prepared to rip the sheet once and for all.

Posted by J.W. Williamson at 11/20/2022 09:09:00 AM
Email ThisBlogThis!Share to TwitterShare to FacebookShare to Pinterest
Labels: Donald Trump, Thom Tillis, Trumpism

The Trump supporters were against Tillis LONG before Trump was on the stage, way back when Tillis was a thorn in NC's side, rather than a national embarrassment.

Being a political whore, Tillis will support whoever will help him the most, while still being McConnell's lapdog.

As for DiSantis, I think he is too smart to run in 2024. Trump will destroy anyone who opposes him in the primaries. DiSantis would do better to cement his position as the best and most successful conservative governor for two terms, then concentrate on winning in 2028, when Trump can't run for reelection.

Musk has just unbanned Trump, and has fired most of the lefty censors that kept free speech off of that social media platform. If Trump starts tweeting again things are going to get fun.

So hate speech and Trump go together like peanut butter and jelly, and Tillis hesitates to take another bite of shift sandwich. The "mixed meat" in the Cuban Sandwich (also called the D-Sandwich) is an acquired taste, but with enough queso Tillis could stomach it.

Wolf's Head seems to conveniently forget that Trump was banned from Twitter (and Facebook) for specifically and actively encouraging violence against elected officials conducting official business to certify the election.

Seeing someone committed to violent insurrection and overturning of legal and fair elections results won't be "fun" - just a recognition that we are living in a failed state, subject to the whims of whoever controls the largest megaphone and the most guns.

Show me the indictment.

Show me the warrant for his arrest for sedition or treason.

Show me a conviction by the most partisan and political Justice Department we've ever had controlled by democrats.

There is none. You can bitch and moan about Trump all you want, but until you convict him in a court of law, he is innocent. Just like the Clintons, the Bidens, Eric Holder and Obama.

However, to educate the readers here what crooked elections and armed insurrection are really like, here you go: The Battle of Athens, Tennessee 1946.

Oddly enough it was also against democrats.

Hound Dog's devotion to Trump negates his identification as Libertarian. (Republicans shoot wolves.)
It is only because of immunity conferred by the Presidency (and supposed great wealth) that Donald Trump is not incarcerated, though a great number of racists enjoy his mouth. Millions died in the Pandemic response Trump botched and he trashed his Constitutional oath.

I don't consider myself a libertarian. And anyway, can't a libertarian choose who he supports, for whatever reason? If they were bound to only support only libertarians, that wouldn't be very free, now would it?

And wasn't it Trump who ramrodded the development of not one, but multiple vaccines in less than a year? And if I remember, what Trump did was on recommendation of Fascist Fauci and the CDC.

As for trashing his Constitutional oath, I don't think he did so. It's not like Biden refusing to enforce US law, especially regarding the border.

"The only real immunity from prosecution in this country is to be part of the GloboHomo elites, especially democrats."

I had no idea Rupert Murdoch, the Koch brothers, the Mercers, the DeVoss family, Elon Musk, and Art Pope were homosexual.

Who knows what lurks in the closets of men...

Besides, I didn't know they were immune from prosecution.

What were they charged with?

Show me the indictment.

Show me the warrant for his arrest for sedition or treason."

Twitter and Facebook are private enterprises and don't need an indictment or conviction to kick someone off their platform if they are a danger to public safety, use the platform in ways that are disruptive to other users or their advertisers, such as promulgating hate speech, launching personal attacks or "doxxing", or spreading misinformation about elections or public health.

"Show me a conviction by the most partisan and political Justice Department we've ever had controlled by democrats."

Notice how Wolf's Head uses the "small d" when referring to Democrats, a common silly and petty right-wing trope.

"There is none. You can bitch and moan about Trump all you want, but until you convict him in a court of law, he is innocent. Just like the Clintons, the Bidens, Eric Holder and Obama."

We'll see where this goes. Meanwhile, all the trumped up nonsense about the Clintons, Bidens, Holder, and Obama have been investigated and looked at for years or decades and there's no there there. This nonsense only lives on the fever dreams of die-hard right wingers and commentators on FoxNews and NewsMax trying to fill airtime.

"However, to educate the readers here what crooked elections and armed insurrection are really like, here you go: The Battle of Athens, Tennessee 1946.

Oddly enough it was also against democrats.

Speaking of insurrections, shall we also talk about this?

Perhaps Wolf's Head, who seems so open-minded, might take the time to listen to this podcast series about that time US-based Nazi groups, in conjunction with Republican politicians, hatched a plot for violent overthrow of the FDR administration?

But, since it's Rachael Maddow, I doubt he'll take the time to bother.

As I ask you, Dear Anon, to review my links, I shall listen to Madcow and let you know what I think.

Are you equating the overthrow of a corrupt democrat machine in Tennessee by citizens and WWII Veterans with the attempted overthrow of FDR by Nazi sympathizers?

Or are you just trying to smear repubs because you hate them? Because, honestly, I don't care about repubs.

If you hate the repubs now for what other repubs did back then, you should also hate today's dems for dems owning slaves back then.

And, by your own admission, Twitter and Facebook are private companies, and don't need convictions is a court of law, you must then agree that Musk is within his rights to reinstate Trump, which has been extremely popular since the leftist propagandists have been fired from Twitter.

As for hate speech or misinformation, who decides that? You?

Do you need a list of all of the misinformation the left has spewed since Trump announced his candidacy back in 2015?

Enjoy your time with your friends and family.

Sure Wolf. I’d love to see your list of misinformation the left has spewed.

Well, they certainly covered alot of material. Big scandal, but so what? We get it, repubs bad.

It would have been better as a 5 to 20 video instead of hours. Its ok if you want to spend hours hating repubs, then have fun watching this.

BettyWhite, where to begin? Soon as Trump announced he was running in 2015, the left immediately began a litany of 'He's doing it for publicity" to "He'll never accept the nomination" to " He'll resign before serving" to "He'll step down after a year". All of these were presented as facts by the dems propaganda ministry, the former mainstream media.

Then, we had the 'Russia Collusion', a fake document paid for by the Clinton's that the FBI KNEW was fake yet was used it drag the country through years of investigation by the most moronic of investigators, Congress. Investigation by Mueller was a farce, false statements by the FBI and CIA officials were made to directly damage the President. The media claimed that Trump being spied on during the campaign was false even after the FBI admitted it. For years.

Biden and his admin constantly tell us inflation is under control, that it's far less than it actually is, and that inflation is Putin's fault, despite trillions of dollars being thrown into the economy by the feds and the left's War on Petroleum.

We were told "two weeks to flatten the curve", that covid came from some market instead of a Chinese lab, that the shots would prevent covid, then it would just prevent transmission, then it would 'maybe lessen the severity of Covid"

Both sides lie. The repubs are just as bad. It's in a politician's nature to lie and deceive, because not only do we let them, but people are stupid enough to believe their lies due to stupidity, ignorance, prejudice or outright hatred.

Try to be skeptical of what you're told. Question the narrative. Examine the source.

Don't let yourself be gaslit by those in power.