NC Senate District 18 is currently held by Democrat Sarah Crawford, who is actually vacating the seat to run in an overlapping NC House district. Democrat Mary Wills Bode is running to succeed Crawford, and obviously it's crucial that this seat remain in Democratic hands. The 18th encompasses a swath of northern Wake County and all of Granville County up to the Virginia state line. NC Free rates the district R+1, but Dave's Redistricting breaks it down 50% D v. 47.7% R. Bode's chances ought to be solid.

Bode is running against Republican businessman E.C. Sykes who describes himself as a conservative but also as "a compassionate Christian" (whatever that means these days). Successful in business: "He was President of a Fortune 500 company and 3 time CEO. He is a member of the NCSU Electrical Engineering Alumni Hall of Fame. He is the founder and current Managing Partner of Aslan Ventures." On his "How Would You Like To Help" checkbox, he lists "Prayer Team" as the first option. Hmmm. Seems like a winning tactic.

Actually, Christian religion dominates his bio. On his website, he doesn't come out as explicitly anti-abortion, but he implies it: "E.C.’s tested leadership skills built on biblical principles reflect his NC heritage and he will fight for us and the generations of North Carolinians who cannot yet fight for themselves." He and his wife home-schooled their two children, and he reminds us that when he ran (unsuccessfully) in 2020 for Secretary of State against Elaine Marshall, he was carrying the endorsements of Dr. James Dobson, the Susan B. Anthony PAC (dedicated to ending abortion), and the NC Values Coalition led by the formidable Tami Fitzgerald. That's some of the most aggressive Christian nationalists going. Militant bully Mark Robinson, our redoubtable lieutenant governor, also endorsed him during the primary. 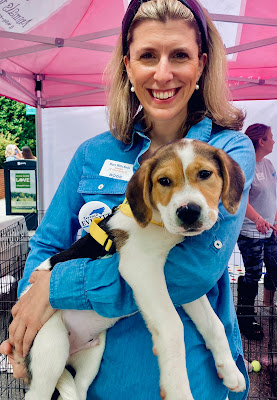 Bode is a lawyer who's practiced mainly fast-track corporate law in big Wall Street firms (though while in law school at Chapel Hill, she interned in the Office of the Federal Public Defender for the Eastern District of North Carolina). Governor Cooper appointed her to the NC Real Estate Commission in 2020 (her two-year term ends later this month), and she was until recently the executive director of North Carolinians for Redistricting Reform, a bipartisan non-profit co-chaired by former UNC President Tom Ross and former NC Rep. Chuck McGrady. In fact, she says she left New York City and came back home to NC explicitly to join the fight to end gerrymandering.

She comes from a high-octane political family: "Her mother, Lucy Hancock Bode, was Deputy Secretary and Secretary of the Department of Human Resources under Governor Jim Hunt. Her father, John, is an attorney and lobbyist in Raleigh" (Gary Pearce).

Bode flanked Gov. Cooper yesterday, along with other Democratic women members of and candidates for the General Assembly, as he signed an executive order meant to protect North Carolina abortion providers from being sued by other states.

A win by Bode will not mean a pick-up for Democrats but a crucial holding on to what was already won.

Posted by J.W. Williamson at 7/07/2022 08:51:00 AM
Email ThisBlogThis!Share to TwitterShare to FacebookShare to Pinterest
Labels: E.C.Sykes, Mary Wills Bode

Thanks for the heads up - I just sent a donation.