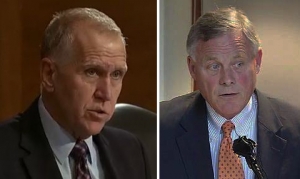 Senator Dick Burr is retiring, so his vote was perhaps easier than Thom Tillis's, who seems determined to become a moderate bridge-builder (not that there's anything wrong with that). Joining ten other Republicans (some of them even more surprising in their choice to support gay marriage -- see list below), Burr and Tillis helped reach the total of 62 senators favoring cloture on the Respect for Marriage Act. Sixty votes are required to forestall a filibuster. The full Senate is expected to vote again on passage, immediately after Thanksgiving, at which time it goes back to the House which has to vote again because the Senate added a religious liberty amendment not in the original House version.

The Respect for Marriage Act would require that people be considered married in any state as long as the marriage was valid in the state where it was performed. That may sound like a loophole, and it does allow some backward states to cause trouble. If the U.S. Supreme Court overturns its prior same-sex marriage rulings, state governments could make the unions illegal within their borders, requiring same-sex or interracial couples to travel to a state where it is legal in order to wed. Those home states would, however, need to recognize the marriages under this bill, as would the federal government. So maybe it's a loophole with no real effect.

The bill would also repeal the 1996 Defense of Marriage Act, which defined marriage as the union of one man and one woman and allowed states to decline to recognize same-sex marriages performed in other states. That law has remained on the books despite being declared unconstitutional by the Supreme Court’s ruling in Obergefell v. Hodges.

The religious liberty amendment that the Senate added (and which the House will have to vote on) clarifies that the bill does not authorize the federal government to recognize polygamous marriages and confirms that nonprofit religious organizations would not be required to provide “any services, facilities, or goods for the solemnization or celebration of a marriage.” There are plenty of other venues besides Our Church of the Divine Retribution ("but it has a center aisle!"), so there's no need to force yourself onto religious groups that have a bad case of the yips over gay marriage.

While this law is a good step, SCOTUS could still overturn Obergefell, allowing states to prohibit gay marriages within their own state, putting us in a position similar to Dobbs where couples would have to go to states where it is legal to get married and be denied rights like employment and tax equality in their state.

As far as Tillis, he simply drifts in whatever direction the wind is blowing at the moment. After the 2022 mid-terms, he realizes he'll have to run as a "sane" Republican next time around.

Don't forget that Tillis was a key figure pushing Amendment 1 when he served in the NC legislature. And, of course, if SCOTUS overturns Obergefell, Amendment 1 will kick into force again here in North Carolina.

I'm sure Tillis will be more than happy to let his surrogates, social media bots, and dark money contributors remind conservative voters of this, while portraying himself as "moderate" in the general election.