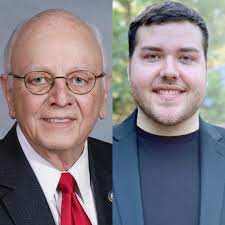 The good news about HD62: Dave's Redistricting now calculates the lean as very slightly Democratic, 49.1% D v. 48.6% R. NCFree is not as optimistic. They rate it as R+3. The district sits in western Guilford hard against Forsyth on the I-40 corridor but it now has more Greensboro urban precincts. It's going to take an avid volunteer base and some shoe leather to knock doors, find those swing unaffiliateds, and get them to the polls. Faircloth's age and iron conservatism ought to be liabilities, if Gray has the means (and the willingness) to go after his record.

Brandon Gray challenged Faircloth in 2020 too, but in the final tally Gray trailed by 8,000 votes. Still, for a novice candidate, taking almost 43% of the vote against a very seasoned incumbent was nothing to sneeze at. Gray was 25 at the time and perhaps less credible as a challenger than he is now with two more years of experience. Here's an interview Gray did with WXII in 2020:

Posted by J.W. Williamson at 7/11/2022 10:28:00 AM
Email ThisBlogThis!Share to TwitterShare to FacebookShare to Pinterest
Labels: Brandon Gray, John Faircloth