The Election Denyer Running for NC Senate in Wake County

I haven't written about NC Senate District 13 because it looks like a solid Democratic district right in the middle of Wake County. Conservative NCFree rates it D + 6. Dave's Redistricting scores it 62% Democratic. Usually Republicans run their craziest candidates in districts they have no chance of winning. It's a pattern that is playing out again in SD13.

Last night while I was eating up raw meat at a Fall Democratic Rally, the Raleigh NandO published a candidate profile of David Bankert -- actually, not reportage written up by a reporter but a short-and-sweet candidate questionnaire, in which Bankert declares himself undecided on legal marijuana and undecided on Medicaid expansion and very much opposed to abortion, and by the way, "No" to "Do you accept the results of the 2020 Presidential Election?" No further discussion. Just "No!"

Oh, come on out and say it, Mr. Bankert. You're willing to declare the Republic we've built through sweat and blood invalid because your guy didn't win.

Then I go to his website, and it's instant cognitive dissonance, because the 1st thing you encounter is this large print declaration (ALL CAPS in red) -- "Our Society Is Too Divided" -- followed by these soulful words of devotion to the Republic: "I’m offering a fresh voice and determination to bring average citizen values back to our legislative process. It’s time for We the People to get more involved.”

I see something flawed in Mr. Bankert's logic. Unless, of course, he's talking about the "legislative process" now being promoted by Trumpists in front of the Supreme Court (Moore v. Harper), arguing that state legislatures cannot be challenged by state courts in matters of gerrymandering and voter suppression. There's every chance that the Amy Coney Barrett court will agree with any wild-ass theory the Federalist Society dreams up.

Maybe that's what he's (secretly) planning on, joining BergerMoore in Raleigh to force on us worse gerrymandering and creative ways to suppress the black and brown vote, particularly voter photo IDs, followed by a clamp-down on the youth vote -- that is, once the Samuel Alito court gives them the green light.

Bankert is a retired electrical engineer with a degree from Carnegie Mellon and an MBA from the University of Pittsburgh. He goes easy on the right-wing stuff on his website, which makes sense because he's running in a probably unwinnable district, but the NandO questionnaire may have flushed him out. 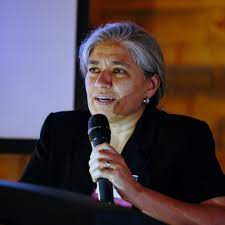 Grafstein is a Raleigh disabilities and civil rights litigator, currently on staff of the non-profit advocacy org Disability Rights North Carolina. She's listed on Super Lawyers as a top rated litigator. She's endorsed by both Lillian's List of North Carolina and by the national PAC Emily's List.

She's a first-time candidate but has a long involvement in politics, mainly running the election campaigns for Democratic judges Linda Stephens, Robin Hudson, and Suzanne Reynolds.

Grafstein won her primary last May against Patrick Buffkin with almost 67% of the vote.

Yes, she is a powerful candidate who ought to win this race even on a rainy day.

There's one other candidate on this ballot, the somewhat famous Libertarian Michael Munger, a Duke professor of economics and political science who ran for governor in 2008 and for an NCHouse seat in 2020. Like most Libertarians (like more than most perhaps), I can agree with some of his policy positions since he's more socially liberal than some Democrats.

He might draw up to 4% of the general election vote.