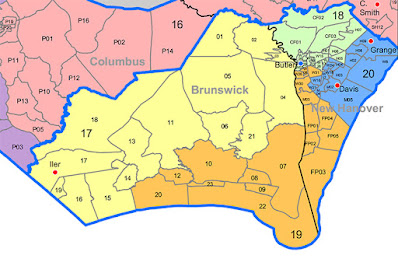 NC House District 20 in New Hanover County down on the coast ranks high on Carolina Forward's 2022 slate for potentially flipping a Republican district. Right now, the seat is held by old possum Ted Davis, who, I'm happy to remind everyone, when he was a county commish, he turned down aid from the state for free contraceptives for Hanover County teenage girls: "If these young women are being responsible and didn't have the sex to begin with, we wouldn't have this problem to begin with," he huffed. There's living in the real world, and then there's Ted Davis.

That name Block stands for royalty of a sort, both civic and cultural. Amy DeLoach's grandmother, Hannah Block, became Mayor Pro Tempore of the Wilmington City Council in the '60s, had headed the local USO in the '40s (the building is now known as "Hannah Block Historic USO"), and became big in the early years of the Azalea Festival (started 1948) as a key mover. Amy’s father, Frank Block, owned the Block Southland shirt factory, served three terms in the North Carolina State Senate, and endowed the Charles and Hannah Block Distinguished Professorship in Jewish History at UNCW. "Named after their mother and father, the professorship serves to provide UNCW students the opportunity to learn from distinguished faculty about a culture and history that is near and dear to the Blocks" (Wrightsville Beach Mag). Amy’s mother, Wendy Block, served on the boards of Thalian Hall and the NC Battleship Commission. She led the efforts to raise money to build Wilmington’s Hospice facility as well as other charities. Both Grandmother Hannah and Mother Wendy were awarded the Order of the Long Leaf Pine by the Governor for their lifetimes of service. Amy is active (as president) in the 120-year-old conservative B'nai Israel congregation in Wilmington.

DeLoach belongs to a noble eleemosynary heritage and evidently practices it herself, volunteering on various non-profit boards (her website lists several, all in keeping with family tradition), but this is her first foray into elective office, following her grandmother's path. My problem has been with documenting her actual activities. Other than sitting on non-profit boards, she never got her name in the press on the World Wide Web for leading something, steering something, organizing for a cause -- no mentions of her passions, her organizational skills, her sweat equity in service to a particular cause. If she's been engaged in active politics in the recent past, I can't find the trail. Her one talking-head video posted on her website hits all the liberal sacred cows (pro-choice, for expanding Medicaid, pro-environment, against banning books). Her pitch is for "common-sense and moderation," which points vaguely at the far-out, extremist, radical nature of the new Trump Republican Party. DeLoach, despite the greenhorn patina, could appeal mightily to the suburban Republican and Unaffiliated women of  southeast Wilmington and Wrightsville Beach.
In addition to Carolina Forward, she's been endorsed by Lillian's List and Climate Slate. Her Twitter feed is lively, where she's establishing a platform, forming a progressive identity.
Posted by J.W. Williamson at 7/06/2022 10:08:00 AM
Email ThisBlogThis!Share to TwitterShare to FacebookShare to Pinterest
Labels: Amy Block DeLoach, Ted Davis Jr.