NC House District 45 in southern Cumberland County is another of those "safe" Democratic seats that Dave's Redistricting scores at 55.9% Democrat. It's an open seat this year. It got redrawn to expose incumbent Republican House member John Szoka to instant defeat, so he announced he would jump over and run for Congress in the new 4th CD, but that rug got jerked away from him too by the court-ordered redrawing of Congressional districts. Szoka's now running for a Cumberland Co. Commission at-large seat and might get the prize as the most abused-by-redistricting Republican in the whole state.

The new NCH45 is 39% Black, and the three-way contest to replace Szoka features three Black candidates. 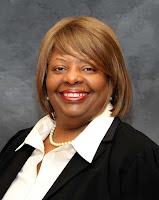 Jackson came within 703 votes of defeating Szoka in 2020 when some analysts considered the old district a "toss-up," and she's back this year with some instant name recognition. She was heavily promoted in 2020 by the Long Leaf Pine Slate (now known as Carolina Forward), and she even got a highly publicized shout-out from President Obama.

She teaches political science at Fayetteville Tech and holds a doctorate from Walden University in Minnesota. She's been active in civic life in Fayetteville. She was appointed to a seat on the Fayetteville City Council after the death of a member but was forced to resign after only a month because of a possible conflict of interest with her other appointed position as a Cumberland County magistrate.

If she has a website, I can't find it. The link on her moribund Facebook page goes to a Chinese site, and her Twitter account hasn't been updated since her 2020 campaign. I hope her absence from social media means she has a good ground game going, but it looks like some coasting to me. 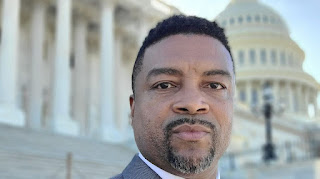 Davis was elected to the Fayetteville City Council in 2019. He is retired from the Army and serves as the senior pastor at Force of Life Fayetteville Ministry. While in the Army, Davis was awarded the Bronze Star and Purple Heart for wounds sustained from improvised explosive device blasts while leading route clearance operations in Marjah City, Afghanistan. Prior to his election to the Fayetteville City Council, he served as chairman of the Planning Commission, vice chairman of the Joint Appearance Commission, and as a teen court judge for Cumberland County.

Whereas a veteran candidate like Frances Jackson seems asleep at the wheel this year, Davis is actually mounting a campaign. His Facebook page features a photo of a canvassing team in matching T-shirts, usually a good sign.

Byrd actually ran against Frances Jackson in the 2020 Democratic primary for this seat, and she buried him. He's back for a rematch. He's the only one of these three candidates who has a website, though it's the one he had before the March 2020 primary and hasn't been updated.

He attended Shaw University in Raleigh, entered the Army Reserve during that time, and from Fort Bragg, the Army sent Byrd to Iraq to oversee security for the Iraqi High Tribunal during the trial of Saddam Hussein. "Upon return to Fort Bragg as the provost marshal (police chief), Keith’s leadership was instrumental in helping transform Fort Bragg into one of the safest and most secure facilities in the military...."

He retired from the Army at the rank of Lieutenant Colonel.