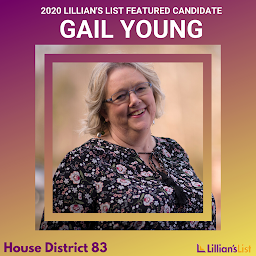 Incumbent Republican House member Larry Pittman decided to emulate Trump by saying yet another outrageous thing (he has a history) -- that Black Lives Matter protestors are "vermin" and need to be shot down in the street if they don't obey -- which prompts me to highlight this a.m. his Democratic opponent on the November ballot, Gail Young. I've been following her since she ran the first time in 2018 (in both a Democratic primary and in the General), and she earned a very respectable 47.22% of the vote against Rev. Pittman (yes, he's a preacher of the Gospel, though it's a version I don't recognize).
The 83rd House District is mainly central Cabarrus County (Kannapolis and Concord) but also extends northward into southern Rowan County. The average population of NC House districts is mandated at 79,462; according to Ballotpedia, District 83 had 78,419 citizens as of the 2010 Census, yet only 28,038 of those residents opted to vote in the District 83 race in 2018 -- which suggests that Gail Young has plenty of opportunity there for expansion. Still (we try to be realistic), Dist. 83 is considered "safe Republican" in one rating, though Michael Bitzer sees it a little rosier as "lean Republican." Either forecast leaves lots of room to move new voters to the polls.
Lillian's List of North Carolina made her a featured candidate. Now or Never NC, an independent political action committee that backs "top challengers who strongly support public education, redistricting reform, voter access, and who have an appreciation for local governance," has promoted her. The NC League of Conservation Voters, the NC Sierra Club, Equality NC, Moms Demand Action, and Planned Parenthood have all endorsed her.
Before the coronavirus lockdown she was organizing volunteers for "Walk Cabarrus," and nothing moves voters like a show of energy from a campaign with lots of supporters. All of us political activists are suffering from the restrictions imposed by social distancing, but I hope those platoons of walkers for Gail Young are being put on the phone -- second only to door-knocking for political persuasion.
On June 2nd, the day after Trump had Lafayette Square violently cleared for his vanity project, Gail Young tweeted "We do not consent to being governed this way," a simple declaration that goes to the very heart of our constitutional democracy. Defines the situation in House District 83 too, where the incumbent representative calls black protestors of police brutality "vermin." All of us cannot consent to being governed this way.
Posted by J.W. Williamson at 6/17/2020 07:58:00 AM
Email ThisBlogThis!Share to TwitterShare to FacebookShare to Pinterest
Labels: 2020 Blue Wave, Gail Young, Larry Pittman