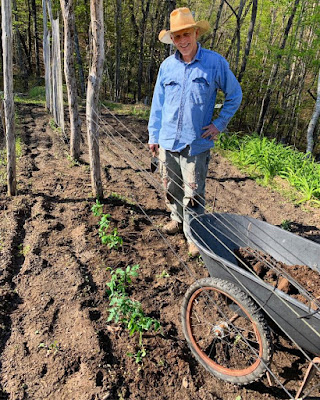 NC House District 113 stretches along the South Carolina border through Polk, the southern half of Henderson, and Transylvania counties. It's considered "Safe Republican" (groan). Some 23% of voters are registered Democrats; 36% are registered Republicans (ack!); but 41%, a plurality, are registered Unaffiliated. Is that a crack of light in the gloom? And consider this political tremor from back last December: three Transylvania county commissioners left the Republican Party en masse and registered Unaffiliated as an expression of disgust with the direction of their party.
Democrat Sam Edney, a former school board member in Transylvania County, ran for the District 113 seat in 2018, got 42.48% of the vote against a young Republican whippersnapper named Cody Henson, who had anger issues and who ended up resigning the seat after pleading guilty to cyberstalking his wife. The Republican executive committees from the three counties in the 113th District appointed another young Republican whippersnapper, Jake Johnson, to finish Cody Henson's term, and Sam Edney is back, more energetic and more determined than ever to take a seat in Raleigh that few think can be taken. Smugness and complacency on Jake Johnson's part might be a huge mistake.
Edney has been actively running since midway through 2019, and he shows every mark of a candidate who learned from a previous loss. He's worked to expand his volunteer base (though "boots on the ground" have now become "voices on the phone" in the Age of Covid). Plus he "fits" his district well. He's one of the common folk, came up via hard knocks from what he himself calls "a dirt poor" childhood in Henderson County: “I know what it means not to have food in the house. By working hard, I made a success. But I had lots of help along the way. When people helped me, I didn’t care what their politics were. And when I helped others, their political leanings didn’t matter to me.”

Our refusal to expand Medicaid hurts working people. It hurts working moms. It hurts those with substance abuse issues who have lost their children. We cannot continue letting our money go to other states. #ExpandMedicaidNow
4:19 PM · Jun 10, 2020
I have a deep soft spot in my heart for Sam Edney, not only because he's an avid gardener with holes in the knees of his pants. He's running what some people think is an impossible race against harsh odds, and he's got a powerful ally at his side in his wife Deda. I've spoken to both on them on the phone and offered them unsolicited advice from the perspective of someone who's fought seemingly impossible odds but in a very different context. I've donated to Sam's campaign and want to see him win. If the mass defection from the Republican Party of three Transylvania county commissioners is any sign of tectonic forces shifting their weight, then this is the year for impossible possibilities in House District 113.
Posted by J.W. Williamson at 6/16/2020 08:25:00 AM
Email ThisBlogThis!Share to TwitterShare to FacebookShare to Pinterest
Labels: 2020 Blue Wave, Jake Johnson, Sam Edney