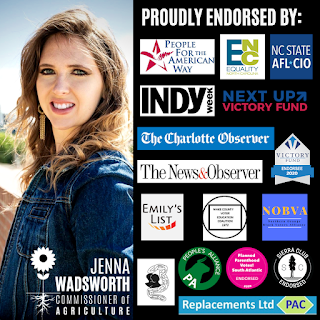 Let's call Jenna Wadsworth "The Dirt Road Democrat on a Mission To Bring North Carolina Agriculture Into the 21st Century."
She's been coming on strong all year, a blast of youthful energy ready to break both an age and a gender barrier in North Carolina politics, running for an office that's been in the idle hands of an aging white guy for long enough. She is a clear down-ballot asset for all Democrats running in North Carolina this year.
In November of 2010, she became one of the youngest -- at age 21 -- elected officials in the state, earning a seat as a supervisor of the Wake County Soil and Water Conservation District where she's continued to serve ever since. Though born in Wake County, she touts her growing up on a dirt road in Johnston County on her grandparents farm where she learned how to raise corn, soybeans, tobacco, cattle, cotton, and hogs -- all the major food groups of Southern agriculture!
A dirt road farm kid, yes, but also a major brain, as she qualified for the North Carolina School of Science and Mathematics in Durham, no easy feat. She went on to graduate magna cum laude from NC State University in 2011, after she'd been elected a supervisor in Wake for Soil and Water Conservation. Since that election of 2010 she's been very active in pursuing farmland preservation and "local foods enhancement" projects and conservation easements. 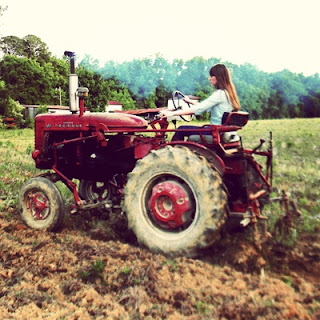 Face forward? Yes. "Jenna is the Co-Founder and former Co-Director of a progressive nonprofit called New Leaders Council – North Carolina. She serves on the North Carolina School of Science and Mathematics Alumni Association’s Board of Directors, is an active member of both the Young Elected Officials Network and Local Progress, and she speaks to international delegations for the U.S. Department of State’s International Visitors Leadership Program and US AID--resulting in her recent appointment to the North Carolina chapter of the U.S. Global Leadership Coalition. She became a small business owner in 2017 and works as the Managing Partner of her political and fundraising consulting firm Elevated Prospects, LLC."
She still farms several acres of vegetables and is a card-carrying member of the Farm Bureau.
Republican incumbent Steve Troxler squeaked by Democrat Britt Cobb in 2004 to win the office and has been reelected easily since then. This year may be different. Troxler is best known in these precincts for being a lax enforcer of civil penalties and lax on citing violations of milk grading standards and unwilling as a public official to take a hand in protecting poultry processing workers from COVID-19. 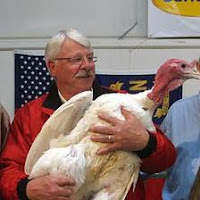 After President Trump ordered all meat-processing plants to stay open at the end of April, Troxler bragged that no meat plants had shut down in North Carolina and that he intended to keep them all open. He seems to have Trump's general level of empathy for front-line workers. He defends factory hog farms and their right to pollute the air and water of their neighbors.
Jenna Wadsworth presents a clear contrast on issues. She supports the growing of hemp as a cash crop and supports the legalization of cannabis and thinks the Department of Agriculture can have a strong hand in preparing farms for appropriate responses to climate change, which brings with it disastrous weather challenges for all farmers.
Posted by J.W. Williamson at 6/11/2020 11:19:00 AM
Email ThisBlogThis!Share to TwitterShare to FacebookShare to Pinterest
Labels: Steve Troxler, Steve Troxler; Jenna Wadsworth; 2020 Blue Wave

We need a busload of Jennas.
We could better enjoy our milk and food if we knew someone was trying to enforce the rules and not just seek graft.