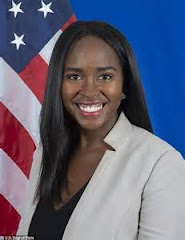 Mary Elizabeth Taylor, a senior State Department official who has served in the Trump administration since its first day, has resigned over President Trump’s recent handling of racial tensions across the country — saying that the president’s actions “cut sharply against my core values and convictions.”

Taylor, assistant secretary of state for legislative affairs, submitted her resignation yesterday. Taylor’s five-paragraph resignation letter, obtained by The Washington Post, serves as an indictment of Trump’s stewardship at a time of national unrest from one of the administration’s highest-ranking African Americans and an aide who was viewed as loyal and effective in serving his presidency.

“Moments of upheaval can change you, shift the trajectory of your life, and mold your character. The President’s comments and actions surrounding racial injustice and Black Americans cut sharply against my core values and convictions,” Taylor wrote in her resignation letter to Secretary of State Mike Pompeo. “I must follow the dictates of my conscience and resign as Assistant Secretary of State for Legislative Affairs.”
Posted by J.W. Williamson at 6/19/2020 07:24:00 AM
Email ThisBlogThis!Share to TwitterShare to FacebookShare to Pinterest
Labels: Mary Elizabeth Taylor