Republican Madison Cawthorn buried Lynda Bennett in the 11th CD, 30,444 to 15,806. Bennett had been endorsed by President Trump and by Sen. Ted Cruz of Texas and by Rep. Jim Jordan of Ohio, but maybe the Republican voters in the 11th District were unamused by the way the former holder of this seat, Rep. Mark Meadows (now of the White House staff) tried to engineer a coronation for Bennett.
Cawthorn is a paraplegic from a catastrophic car accident in 2014 when he was 18 years old. He told the story to the Washington Examiner: He was riding back to the North Carolina mountains from a springbreak beach trip. His friend was driving. Cawthorn was asleep in the front seat. Unfortunately, so was the driver, who hit a concrete barrier going 70 miles an hour: "...the impact snapped [Cawthorn's] spine. The accident burned him, shattered his ankle, broke his pelvis, and cost him a kidney. His internal organs were pushed up into his chest, crushing his lungs. 'Both my lungs collapsed, so I couldn't speak for a very long time,' he said, recalling how he learned to communicate with sign language. Only his head escaped injury. The doctors were amazed he survived."
He says he was left with over $3 million in medical debt, which is why improving the healthcare system has been his number one issue. How he intends to improve the system remains vague, especially as his number two issue is protecting the U.S. from "socialism." He also loves him some Donald Trump, the endorser of Lynda Bennett. (The ironies are piling up!)
He lists his "occupation" as "motivational speaker." If elected, he would be the youngest member of the U.S. Congress, barely old enough to serve, in fact. The Democrat in the race, Moe Davis, has a distinguished background of military and legal service and is about three times older than Cawthorn. I don't know what knowledgeable Democrats are now saying about Davis's chances (Cook Political Report still rates the district "solid Republican" at R+14), but a knowledgeable Republican, Judge Bob Orr, was leading the cheers for Moe Davis on Twitter last night: "Moe Davis ... [is] the clear favorite now. Opponent barely qualifies to run - turns 25 before the election; virtually no work experience; the 11th now has Asheville back in it; and Trump's getting rolled. National $$ headed Moe's way."
Cameron Webb 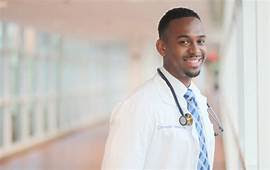 A little over a week ago I profiled the Democratic primary candidates in the Virginia 5th District. Lord have mercy! Dr. Cameron Webb absolutely buried all three of his rivals:

The district is rated "lean Republican." But it's also an open seat, and the Republican candidate presents as stark a contrast to Webb as you could get. The question remains: Will the 5th CD of Virginia elect a Black man to Congress? We're tingling all over at the prospect.
Posted by J.W. Williamson at 6/24/2020 09:51:00 AM
Email ThisBlogThis!Share to TwitterShare to FacebookShare to Pinterest
Labels: 2020 Blue Wave, Cameron Webb, Lynda Bennett, Madison Cawthorn, Morris "Moe" Davis

While I'm not surprised that Cameron won, the margin was a big surprise. I would have thought it would have been a close contest between he and RD. In this climate its hard to get a fix on how a campaign is fairing.

A couple of tidbits of information from yesterday's 5th District contests. The GOP was having a statewide primary to nominate their candidate to face Mark Warner in November. Turnout in the 5th Democratic primary's turnout was almost double what the Republicans drew. Unfortunately, here in Franklin the GOP had higher turnout. Also, a third of Dems voted absentee while only 9% of Republicans did.