"Is That Your President?" It Is a President 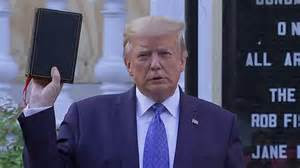 Last evening in DeeCee, Trump staged "an elaborate photo op, using a Bible awkwardly held aloft as a prop and a historic church that has long welcomed presidents and their families as a backdrop."

He wanted to stand in front of a church holding a Bible as a show of strength for his God-obsessed followers, but because he's actually a coward, he couldn't walk to the church without first launching an unprovoked attack on peaceful protestors in Lafayette Park, with armored men on horseback, flash-bang grenades, tear gas, and a wall of militarized police behind hard plastic shields.


...the National Guard moved just yards from the protesters, prompting some screams. Some protesters threw water bottles, but many simply stood with their arms raised.

Then, the chaos began.

Members of the National Guard knelt briefly to put on gas masks, before suddenly charging eastward down H street, pushing protesters down toward 17th Street. Authorities shoved protesters down with their shields, fired rubber bullets directly at them, released tear gas and set off flash-bang shells in the middle of the crowd.

Protesters began running, many still with their hands up, shouting, “Don’t shoot.” Others were vomiting, coughing and crying.

As Trump began to speak, some protesters took a knee several blocks from the White House, again yelling, “Hands up! Don’t shoot!” But they were never able to stay kneeling for more than a couple of minutes, because authorities kept pushing them forward, as a thick, yellow cloud of smoke hung over the crowd. [Coverage by Ashley Parker, Josh Dawsey, and Rebecca Tan]

The unprovoked attack on a peaceful protest seemed to grow from Trump's rage that someone had leaked information that on Friday night he had taken cover in the White House basement/bunker out of fear for his safety: "...he repeatedly wondered why anyone would have disclosed those details to the news media, two officials said."

A massively insecure man uses military force to clear a path for a stroll to a church. Brendan Buck, a longtime former Hill aide who is now a Republican operative, commented, “We long ago lost sight of normal, but this was a singularly immoral act. The president used force against American citizens, not to protect property, but to soothe his own insecurities. We will all move on to the next outrage, but this was a true abuse of power and should not be forgotten.”

“I am outraged,” she said, with pauses emphasizing her anger as her voice slightly trembled. “I am the bishop of the Episcopal Diocese of Washington and was not given even a courtesy call that they would be clearing with tear gas so they could use one of our churches as a prop, holding a Bible, one that declares that God is love and when everything he has said and done is to inflame violence.”

Let's say this human misfire who is currently president gets ousted in November. Will there even be an American Republic left for us to salvage?

Posted by J.W. Williamson at 6/02/2020 07:56:00 AM
Email ThisBlogThis!Share to TwitterShare to FacebookShare to Pinterest
Labels: Donald Trump, racism

More sabotage from a pilfering cheater.