The Collaboration of Mark Meadows and Virginia Foxx

Former Congressman Mark Meadows is from North Carolina. By way of East Berlin? I ask because East Berlin was the home of the Stasi, the East German secret police who taught collaboration with tyranny as self-advancement.

Meadows' sycophancy toward Trump was already legendary. He willingly gave up a seat in the US House in order to be in that man's armpit every day, praising his ideas, facilitating his desires, fanning his fantasies, taking a hike through a park which still reeked of chemicals, trailing behind his Great White Shark like a remora. 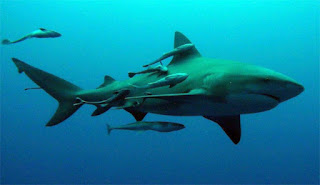 Consider that other accomplished Republican collaborator from the Carolinas, Lindsey Graham, who in the presence of Trump acts like a sorority chick who just got pinned. Anne Applebaum reports, "A friend who regularly runs into Lindsey Graham in Washington told me that each time they meet, 'he brags about having just met with Trump' while exhibiting 'high school' levels of excitement, as if 'a popular quarterback has just bestowed some attention on a nerdy debate-club leader—the powerful big kid likes me!' "

Yes, I've been reading Anne Applebaum in The Atlantic on the psychology of collusion in an authoritarian state, an exhaustive and exhausting trip through the 20th Century and its many outbreaks of tyranny and the collusion of some of the people. Applebaum writes persuasively about the several types of collusion, from the unwilling and reluctant to the ideologically propelled, with lots of examples from the history of the last 100 years. I recommend you read her on your own time.

Look at Congresswoman Virginia Foxx. She becomes a giddy cheerleader (senior citizen league) in Trump's presence, a fawning autograph-hound giggling in the presence of an iron-fisted male she admires. Those of us who've known her personally for decades know her authoritarian instincts and her imperious nature. She drives a car likes she thinks: I'm the only person on this road.

Her toadying to Trump is just as inexcusable as Meadows' and Graham's, if less public and considerably less consequential. Her motivation? Gotta be personal gain. She's gotten progressively richer in public office, and it doesn't hurt building that wealth to be in the front row of group photos featuring ultimate power. Meanwhile, she's quite pious, published "God Is in the House" in 2016 (her version of waving the Bible in front of St. John's), and she issues self-congratulatory little homilies about religious and civic virtue at the drop of a body, most recently following the death of George Floyd in Minneapolis, offering thoughts and prayers for the family and then saying this in classic collaborator style: "I applaud both President Trump and Attorney General Barr’s decision to conduct a full inquiry into this horrific incident."

"Full inquiry"? What? Not a word about Trump's militarizing the streets of the nation's capitol, his lack of respect for protestors, his unconstitutional grabbing of power and the deployment of the top officials in his government -- Mike Pompeo at State and William Barr at Justice -- as accessories in his subversion of the Constitution and its whole framework of checks-and-balances.

Why, even the Pope in Rome condemns such collusion with immoral authoritarianism. Southern Baptists ... not so much. Which perhaps explains Foxx's current self-descriptor as "a Catholic-Baptist," since the absolution you can't get from the one, you can probably get from the other.
Posted by J.W. Williamson at 6/04/2020 10:45:00 AM
Email ThisBlogThis!Share to TwitterShare to FacebookShare to Pinterest
Labels: Donald Trump, Lindsey Graham, Mark Meadows, Virginia Foxx

As I recall in 1983 a falling tree broke Dean Webb's neck (ASU) and an unqualified and giddy back-stabber named Virginia Foxx stepped into the power vacuum. Very much like Trump this nut has no ideology and will do whatever benefits her personally. She was married to a landowner and we called her "The Chistmastree Queen" when I was in grad school. She would lie to your face and badmouth you after pledging her support. I think she has gotten worse over 37 years.