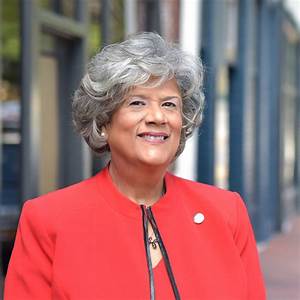 I voted for one of the other Democratic primary candidates for lieutenant governor back on March 3rd. I was actually quite surprised that Holley came in on top of a very crowded field, mainly because I didn't know much about her. Here was the primary final tally:

She didn't meet the threshold for winning it outright (she got 26.58% of the vote and needed 30% to avoid a runoff), but her nearest competitor, state Senator Terry Van Duyn, opted not to demand a run-off, which was her right.
This is the profile of Holley that ran on Pam's Picks (PamsPicks.net) prior to the primary:

Holley announced her candidacy on February 27, 2019. She’s a Baby Boomer born in 1952. She grew up in Wake County, was a front-line elementary student in the desegregation of the Raleigh school system, excelled and went to Howard University. She spent her entire working career in state government, retiring as a state procurement and contract agent. She ran for and easily won her seat in the NC House (District 38) in 2012 and has never gotten less than 79.9% of the vote in any of her reelections.

Holley has not been “a mover and a shaker” in the House. She represents an older style of  politician — reverent of institutions, a calming presence, standing respectfully but with a spine made of hardened steel. She’s very much in the moderate tradition of her father, J.D. Lewis, the first African-American TV broadcaster in the Raleigh/Durham market and Director of Minority Affairs for WRAL-TV (which had also been the editorial home until 1972 of one Jesse Helms). J.D. Lewis “is remembered today as having contributed significantly to the positive dialogue between polarized sectors during an epic time in the nation’s history” (Holley’s website).

I'm happy to see that she is doing more video:
The lieutenant governor's chief duty is presiding over the state Senate (a duty the current lieutenant governor, Dan Forest, has reportedly been chronically absent from). I'd like to see her in that chair. 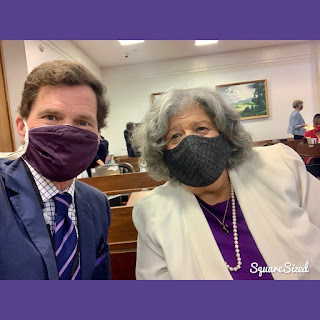 While Holley has been promoting the hashtag #JustWearTheDamnMask, her Republican opponent for lieutenant governor, Mark Robinson, is known for showing up and mingling in the ReOpenNC protests without a mask (and social-distancing be damned!). Jeffrey C. Billman tracked Robinson's social media (Facebook) denialism about the coronavirus and summarized it this way:

1. The (ahem) globalists are taking advantage of a pandemic to destroy the president, who is great.
2. We shouldn’t fear the coronavirus. We should fight the people who are lying about the coronavirus.
3. Socialism is scarier than a disease that could kill hundreds of thousands of Americans this year.

Republican Party operatives seem to be giddy that they have a Black, conservative bomb-thrower on their statewide ticket, but Billman points out that in their glee, no sane Republican operative thought to demand that Robinson scrub his Facebook page of this stuff:

...while he most certainly loves his guns and looooooves his Trump, he really, really does not like gay people. Or trans people. Or the homosexual agenda. Or the Obamas. Or the Clintons. Or the movie Black Panther. Or social justice. Or abortion rights. Or marijuana legalization. Or Mitt Romney. Or Democrats, who are communists—i.e., satanists....

Whatever happens in November, North Carolina is going to have a Black lieutenant governor for the first time in history. We trust it'll be Yvonne Holley.
Posted by J.W. Williamson at 6/26/2020 09:31:00 AM
Email ThisBlogThis!Share to TwitterShare to FacebookShare to Pinterest
Labels: Mark Robinson