A Reoccurring Feature on Who's Jumping Getting Pushed Off Luxury Liner Trump
Reporting by Devlin Barrett: 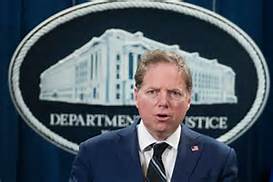 The Trump administration announced late Friday that Manhattan U.S. Attorney Geoffrey Berman, who has overseen a number of investigations involving the president and his political campaign, will be leaving that job, though Berman fired back that he had not resigned and intends to stay in the job to ensure the cases continue unimpeded.
The surreal Friday night standoff marks the latest battle over the Trump administration’s management of the Justice Department. Democrats have decried what they charge has been the politicization of the department under President Trump and his attorney general, William P. Barr.

Barr announced the personnel change in a statement, saying the president plans to nominate the current chairman of the Securities and Exchange Commission, Jay Clayton, for the job.

Berman’s office has been conducting a criminal investigation of President Trump’s personal lawyer, Rudolph W. Giuliani, in a campaign finance case that has already led to charges against two of Giuliani’s associates.

One Justice Department official, speaking on the condition of anonymity due to the situation’s volatility, said the change arose because Clayton was preparing to leave the SEC later this year and had also expressed interest in the New York prosecutor job. Barr liked Clayton and liked the idea, the official said. Barr offered Berman the chance to become the head of the Justice Department’s Civil Division, but Berman declined, the official said.

“I learned in a press release from the Attorney General tonight that I was ‘stepping down’ as United States Attorney. I have not resigned, and have no intention of resigning, my position, to which I was appointed by the Judges of the United States District Court for the Southern District of New York,” Berman said.

“I will step down when a presidentially appointed nominee is confirmed by the Senate. Until then, our investigations will move forward without delay or interruption. I cherish every day that I work with the men and women of this Office to pursue justice without fear or favor — and intend to ensure that this Office’s important cases continue unimpeded.”

Unlike many other U.S. attorneys, Berman is almost uniquely positioned to resist efforts to oust him, at least for a while. U.S. attorneys are typically nominated by the president and confirmed by the Senate, but in Berman’s case he was appointed to the job by the federal court in his district, and there is some legal precedent indicating that only the court, not the Justice Department, can remove him until a replacement is confirmed by the Senate.

Rep. Jerrold Nadler (D-N.Y.), chairman of the House Judiciary Committee, said he would seek to have Berman testify at a previously scheduled hearing next week to examine Barr’s leadership of the agency.
Posted by J.W. Williamson at 6/20/2020 08:41:00 AM
Email ThisBlogThis!Share to TwitterShare to FacebookShare to Pinterest
Labels: Geoffrey Berman