If You Think the COVID Crisis Is Over, Think Again 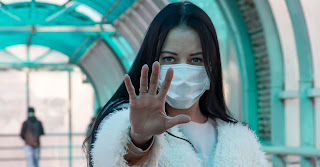 I drove into downtown Boone yesterday to the post office. All the shops looked open, and the sidewalks were crowded with shoppers. I didn't see one person wearing a mask. Surely some were, but I didn't see them.

Because the Trump mal-administration has decided to ignore the pandemic, some people -- many people -- seem to think the whole thing's over. But get a grip, peeps. The infection and hospitalization rate in North Carolina keeps going up. On Monday, 739 people were hospitalized for COVID-19, a new single-day record high. The last record high was Friday. The trend-lines are all pointing up. The seven-day average of new cases topped 1,000. To date, 36,484 people in North Carolina have tested positive for COVID, and more than 1,000 people have died from the virus since late March.

After staying in the single-digits for weeks, confirmed infections in Watauga County shot up into the mid-30s, as more reopening goes forward and people stop being careful. There's a hot-spot outbreak on an AppState construction project, which looked for all the world like a coverup until the wife of a worker blew the whistle.

The WashPost reports that North Carolina is experiencing the second-largest spike in COVID cases in the nation behind Texas. Yet majorities on both the Watauga County Commission and the Boone Town Council have declined to require masks in public. That's a species of wishful thinking much in line with the Trump administration's "if we don't speak of it, it doesn't exist."

Posted by J.W. Williamson at 6/10/2020 08:15:00 AM
Email ThisBlogThis!Share to TwitterShare to FacebookShare to Pinterest
Labels: health care

And the Boone Police handing out water along the protest route Sunday were not wearing masks, even though most protestors were. In-town is the main problem area, but who would hand out the tickets on the public sidewalks? So we're staying home, waiting for the first, second, and third waves of this thing.

The way I look at it, it isn't about handing out tickets so much as it is we, the citizens, applying social pressure to everyone not wearing masks.

Opening too soon was a desperate choice even without the Criminal Cartoon Trump Coup. But they are savaging our nation with their misinformation ads for Dopey Don's re-election. Finally I expect they will bring out "vicious dogs and ominous weapons" on mask wearers. When the unemployment supplement cuts off at the same time as the Covid surge I'd expect a reaction from exposed workers, many already not making a living and not affording insurance. That will be the TELL, when all the treatment bills for Covid come due and start sapping gas, food and rent money. A French style revolution would be possible. There's pent up demand for a renewed social contract.