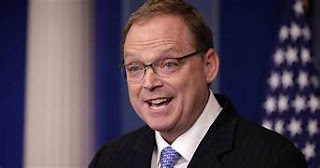 Kevin Hassett, chairman of the White House's Council of Economic Advisers, is leaving his post. He became somewhat notorious earlier this Year of Pandemic for authoring a "cubic model" that forecasted coronavirus deaths hitting zero by May 15. That model immediately sparked a massive backlash among other economists when it was posted May 5th on the Twitter account for the Council of Economic Advisors. The model quickly proved to be astoundingly wrong.
Hassett has served as the White House's chief economist since September 2017. A longtime "movement" conservative, Hassett helped shape the 2017 Republican tax law and -- despite being a staunch free trader and immigration moderate -- distinguished himself as a loyal defender of the president’s policies. Most memorably, he repeatedly appeared in interviews defending the administration's position that, thanks to the Trump tax cuts, sustained 3% growth would be possible.
Posted by J.W. Williamson at 6/23/2020 10:29:00 AM
Email ThisBlogThis!Share to TwitterShare to FacebookShare to Pinterest