The Highest Holy Moment in the Garden Comes Tomorrow 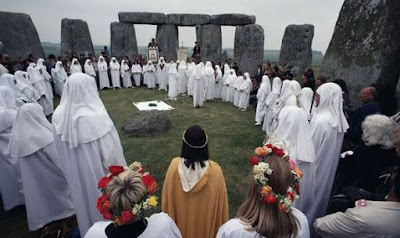 At precisely 5:44 Eastern d.s.t tomorrow, the sun will appear to stand still (solstice) for a split second when it appears to reach its most northerly excursion relative to the celestial equator on the celestial sphere and appears to begin its trip back to the south and winter. Actually, the effect is caused by the wobbling of the globe and not by any movement of the sun, but ancient observers didn't know that and based their religious practices on their lying eyes.
Who am I to argue with the ancients?
Such an astronomical moment demands memorialization, whether religious in tone or hilarious (it will be the cocktail hour, after all). For me, it requires ceremony and seriousness, following the Druids in my family tree.
Posted by J.W. Williamson at 6/19/2020 07:49:00 AM
Email ThisBlogThis!Share to TwitterShare to FacebookShare to Pinterest