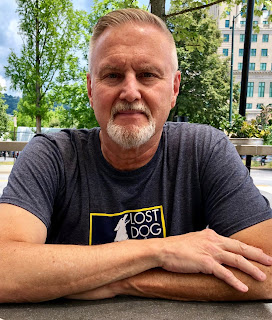 If anyone can do it on his own steam, it's Moe Davis. He's got a adamantine spine from years of "gut-check moments," when as chief prosecutor at Guantanamo Bay he refused to use evidence obtained from torture during the Bush admin and later came out publicly against the handling of prosecutions by the Obama admin. An equal-opportunity pain in the ass. We like that in the age of Trump.

He's a graduate of AppState and lives in Asheville.

He does not yet know who his Republican opponent will be in November because there's a second runoff primary on the Republican side on June 23rd (postponed from May 12 because of COVID) between Trump-endorsed Lynda Bennett, a middle-aged real estate developer, and upstart Madison Cawthorn, a very young 20-something who has the looks of a movie star. Bennett's baggage includes the ill will generated by Mark Meadows' trying to prearrange her assent to the seat. Bennett is standard-issue Tea Party. Cawthorn represents a much younger, perhaps less encumbered generation. If there's resentment of Bennett for her closeness to Meadows, and Republican backlash against Trump, Cawthorn may be the winner.

NOTE: Republican Judge Bob Orr, who has a moral compass and who lives now in Asheville, already announced on Twitter that he would be voting in the runoff for Madison Cawthorn, propelled by Trump's endorsement of Bennett, but that he'll be voting for Moe Davis in November.