Mark Meadows, Finally Rising To the Level of His Incompetence 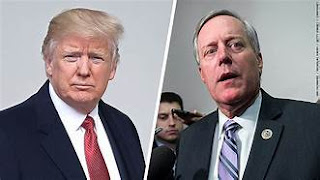 Congressman Mark Meadows (NC-11) will resign his seat early and go to the White House to be Twitterman's Chief of Staff. Good luck with that, Bro!

Meadows leaves plenty of wreckage in his wake. He waited until the day before the end of candidate filing last December to announce he wouldn't be running for reelection, but he had his wife's BFF Lynda Bennett all prepped to step up and run for the seat. Turned out, about a dozen others also wanted a shot at it, and their dyspepsia grew as they discovered how Meadows had tried to manipulate the results.

Lynda Bennett did come in first in the primary but with only 22.72% of the vote. She'll face a run-off on May 12th against second-place finisher Madison Cawthorn who evidently spoke for many 11th District Republicans in his anger at Mark Meadows:


“I am calling for a runoff,” he said. “There’s no doubt in my mind the people of Western North Carolina are sick and tired of watching the politicians trying to force their will upon us and every single vote that was cast against Lynda Bennett was a vote against what Mark Meadows has done.”

Third-place finisher and long-time member of the NC Senate Jim Davis said, “I don’t get Mark Meadows claiming she [Lynda Bennett] was the best-qualified candidate in the race, which is total hogwash, but he has the right to do that,” he said. “This just reeks of the coronation of a candidate, and one of the less qualified candidates in the race,” he added.

During his time in the US House, Meadows was pretty much single-handedly responsible for two government shutdowns and for the ousting of House Speaker John Boehner. "In 2013, he engineered a shutdown in an attempt to strip funding from the Affordable Care Act. In 2018, Meadows encouraged President Donald Trump not to accept a bill to fund much of the government without $5 billion in wall money and rallied others on the right to do the same" (Joel Burgess, Asheville Citizen Times).

Freedom Caucus vandal inside the Oval Office with the stable genius. A match made in pandemonium with plenty of gall.

Dumb and Dumber. You take your pick.