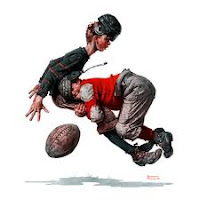 The local Republican convention apparently came off not with a bang but a whimper.

Insurgent candidate for Vice Chair of the local Party, Casey Miller, lost, having been nominated by the inflammable Nate DiCola and despite the support of our other favorite bomb-thrower Deborah Greene. You can read the comments posted on Watauga Conservative for color-commentary.

The Watauga Democrat coverage contains this interesting bit of detail:


A final draft resolution regarding extraterritorial jurisdiction in Watauga County was defeated by a voice vote. The resolution called upon the legislature to require towns such as Boone either to annex property in its ETJ or to abolish ETJs altogether.

The resolution read in part, "The Town of Boone has misused its Extraterritorial Jurisdiction authority to unduly infringe on the rights of property owners in the ETJ in an arbitrary, capricious and unreasonable manner solely for the aesthetical preferences of some Boone residents."

Jeff Templeton, a member of the Boone Planning Board, urged Republicans present not to vote for the resolution despite having drafted parts of it himself. He said he agreed completely with the statements in the resolution but said it would only provide fodder for the opposition if passed.

"I know how it's going to be used against us if we pass it," Templeton said.

Jean Di Cola also proposed an additional resolution calling for relocation of one-stop voting sites to "equalize voting opportunities," but it died for lack of second.

The hesitation to drive in the wooden stake on Boone's ETJ (perhaps because the GOP in the NC General Assembly is doing it for them?) suggests several things: (a) that Jeff Templeton is having second thoughts; (b) that the politics of removing developmental protections from residents of the ETJ has not panned out the way they thought it would; (c) someone laced the morning coffee with Xanax, and the DiColas are strictly tea-drinkers.

I don't get it. Templeton's take thus far has been that the people living in the ETJ do not want the protections. Now he's saying "they will use the issue against us." If people in the ETJ don't want the ETJ, then why would they punish the Republicans for passing a resolution against ETJs?

The Templetons now control the County Commission, Boone Planning Commission, and County GOP. When they snap their fingers, the Souceks and Jordans jump. Not to mention their representatives on the County Commission. They own all the lawyers in town of both stripes. What next? Boone Town Council? Phil Templeton, Mayor of Boone? A family with vision leading us through the 21st Century. Aside from making a lot of money for themselves along the way, I figure the "Templeton Boone" of the future can be seen in the Blade Runner. Probably will be renamed Templeton. All the high rise and ugly buildings you could ever ask for. No trees, no grass, no yards, no neighborhoods, etc. Businesses and apartment complexes only. If St. Patrick's Day teaches anything, it's that people are really attracted to that green stuff, and Boone's first family seems to have a big share of that so there is no lack of sycophants. Something else they love.

lol! So these Republicans wrote a resolution and presented it at their convention and then asked their people to vote against it!

I can see very well that Republicans hate planning!

Yep Henry. That's the way it works in the Republican party. We don't all just vote for the resolutions they tell us to.

I can see why you are confused about this.....being a liberal democrat and all.