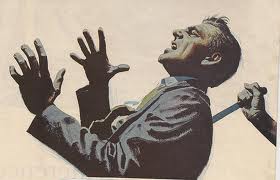 Taking instruction from the scorched-earth behavior of Republicans in the North Carolina General Assembly, Watauga County Commission Chair Nathan Miller launches his own local version of "government by revenge."

Boone raises the bulk of sales tax revenues in the county but will under Mr. Miller's scheme get $2 million less of that money back. That's a knife in the back. Or the chest.

Why? Because Boone has done what no municipality can ever do and survive ... inconvenienced the Templetons. And according to the very interesting comment thread under that article, the Town of Boone hasn't even done that, certainly not like the Templetons have been claiming (whining).

Meanwhile, Mr. Miller has been wheeling & dealing with the other towns in the county for kickbacks, the "hybrid" solution, Mr. Miller called it, which "could possibly be executed with the other municipalities exhibiting a surplus so Watauga County doesn't end up in the red" -- kickbacks, say I. Such a scheme smells like corruption, not to mention the various conflicts of interest among the several lawyers involved.

This will make for a pretty good  lawsuit or for a subsequent news media investigation, whichever comes first.

Whew... Jeff Templeton is kind of an asshole, isn't he?

Is it right for Nathan Miller to bring lawsuits against Boone when the town and county have a bunch of leases and contracts? Seems like a conflict of interest.