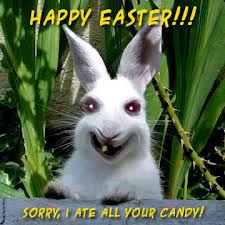 I love the "Urban Dictionary" for defining words accurately. To wit:

bastard: noun, an uncaring and destructive person; you covered dog shit with a leaf and left it outside your brothers' front door because you thought it was funny, you bastard. You killed Kenny, you bastard.

The Republicans currently populating the General Assembly in Raleigh are bastards. As Jim Jenkins said Wednesday, the legislative Republicans "are more interested in destruction than in building.” That's what bastards do.

Bastards don't want you to vote. Bastards have only one good reason to limit the Early Voting period. Bastards are hypocrites about Sunday voting. One of the biggest bastards, Rep. Edgar Starnes of nearby Caldwell County, said, "I think Sundays just should be – some things you just shouldn't do on Sundays, so I am just opposed to voting on Sunday." What a bastard!

Are we going to allow the bastards to keep us down? That is the only question.

The bastards have all gone home now for Easter, because as Rep. Starnes suggested, Sundays are for smug bastards to gather in their churches and thank God they are not as other men (and women) are.

You bastard, you do not have the balls to examine all the corruption that has gone on for years in Madison County. Democrats define corruption in voting in Western North Carolina and you assist in the cover-up.

Nice thread, Williamson. Are you really that upset that the Democrat abuse machine is being dismantled?

Why is it that every time the Republicans do terrible things, rank and file Republicans come jumping on blog threads saying Democrats screw everything up? I mean, the Republicans statewide are in charge of pretty much everything now. Yet they are stilling hoping their voters are dumb enough to think that the crap being thrown by them is because "Democrats." You've got to be pretty stupid at this point to believe that.

Growing up, the story of the Pharisee and the Publican was always one of my favorites...and much stressed at church. Certainly one to remember and live by. Thanks for calling it up in present circumstances.

Steve: At this stage of the game, both parties are up to their necks in corruption, malfeasance, conflicts of interests, etc. And in many counties amd towns, the parties are in cahoots.

But the Democrats for many decades, if not longer, had control of the state legislature, the judiciary, and most counties.

So, don't act like this is something new. It is not.

Democrats define corruption. Really now then why is WNC so republican then. You took one county and extrapolated to an entire region.

Camelot said... Democrats define corruption. Really now then why is WNC so republican then. You took one county and extrapolated to an entire region