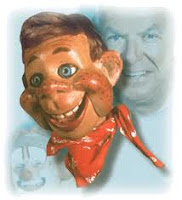 They tell us -- Thom Tillis tells us -- that voter photo ID voter suppression is coming to North Carolina.

Yeah, we knew that.

Governor McCrory Howdy Doody was nodding his head up and down yesterday, up and down, because he hearts everything the radicals in the General Assembly tell him to do. And, by the way, he equated voting with buying Sudafed, for which he said you need a photo ID without also distinguishing between the right to vote and the right to buy an ingredient in methamphetamine. Which in his mind script are evidently the same thing.

Yeah, we knew that too.

Yesterday, Sharon McCloskey published the complete, appalling list of all the cases of voter impersonation that have come to light since 2000, and it's an epic, long list -- 22 persons across a dozen years. That's approximately 1.83 cases of voter fraud per year, folks, and this outrage has GOT to end before this country elects another Muslim Kenyan, let alone another black man. How else will North Carolina keep elective office safe reserved for white people?

Bob Hall, a great North Carolina warrior for voting rights, issued a statement on the Republican push to restrict voting, which said in part:

"Democracy North Carolina continues to believe the photo ID requirement is a needless and expensive barrier to address a problem – voter impersonation – that is grounded in myth more than fact. Any new barrier will have a consequence, including making the process appear confusing and intimidating to some voters. Depending on how a photo ID requirement is implemented, it could cost millions of dollars and affect tens, if not hundreds, of thousands of active registered voters. It inevitably will have a disproportionate impact on low-income citizens, African Americans, other people of color, and seniors who no longer drive."

"It inevitably will have a disproportionate impact on low-income citizens, African Americans, other people of color, and seniors who no longer drive."

How so? These people have to have I.D. to even purchase medicine or buy a gun (which is also a right).

Not everyone wants to buy a gun. And since when does one have to show ID to get a prescription filled? I never do.

More to the point, since our present system has been proven to work well, why add more government interference that will only cost more money, and slow up the voting process?

Not everyone wants to vote either. What is your point. The issue is having to have I,D. to exercise a right.

Working well is it?

You have to have a picture ID to get many drugs. Call your local pharmacy and check.

The "scandal" Anon 10:22 posted about wouldn't have happened any differently with an ID law.

Let's see how the Republicans explain opposing the compromise Voter ID bill. It gives them what they were asking for, but it allows the people they are trying to suppress to vote. Suddenly it won't be enough. Suddenly it will be unethical.

Read the Wisconsin research on Voter ID and then explain how it doesn't disenfranchise hundreds of thousands of voters.


That never matter though. It's all about screwing the common man.

And look at this. The GOP used the same technology the are balking about to the SBOE.

The constitution mandates that arms be "well regulated". The constitution does NOT say that voters must have a government issued ID to exercise their basic civic responsibility. It's just an extra layer of unnecessary bureaucracy that wastes time and tax payer's money.

The constitution calls for the militia to be well regulated, not arms.

"A well regulated militia being necessary to the security of a free state, the right of the people to keep and bear arms, shall not be infringed."

The militia is the people as a whole. The amendment means individuals can own guns, not that guns are to be regulated. The Supreme Court upheld this amendment as an individual right in the Heller Decision.

Either your logic or your education is faulty, brushfire.