Got a Signed Lease? That Means Nothing To the GOP in the General Assembly 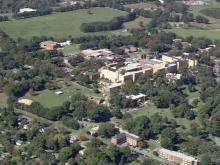 During her last days in office, Governor Bev Perdue inked a deal with the city of Raleigh to turn the 325-acre Dorothea Dix property, a former mental asylum, into a "destination park" in the heart of Raleigh and for all the people of North Carolina.

"A group of local business leaders and civic boosters known as Dix Visionaries had lobbied for years for Raleigh to gain control of the Dix property for an urban park, and the group recently pledged $3 million to help the city create a master plan for the site," wrote WRAL.

But with our new over-lords in the General Assembly, a signed contract isn't worth the paper it was printed on. Dual bills were introduced yesterday in both the NC House and the NC Senate to simply eliminate that contract and, we assume, sell the property to the highest bidders for condos, strip malls, megaplexes, and big car dealerships.

"Words cannot express how disappointed we are with the introduction of a bill that would put the preservation of the Dorothea Dix land in jeopardy," Dix Visionaries said in a statement. "This lease was not a politically partisan act. Dorothea Dix Park was created by support from the Council of State, mayors, elected officials, business leaders, community groups and an overwhelming majority of citizens across North Carolina."

"It's almost heartbreaking," Raleigh Mayor Nancy McFarlane said. "The city went into this in good faith, and we expect the state of North Carolina to honor their contractual obligation."

"Good faith"? It would be nice if this bunch in power had any.

Someone influencial in Raleigh tweeted yesterday that this is really a big "F You" directed at Bev Perdue as her parting gift from a congregation of selfish children prone to tantrums.