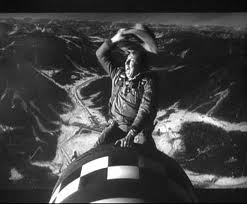 Or, How I Learned to Stop Raging and Love the Guv.

Chad Nance's piece in Camel City Dispatch is worth a read and a lot of cogitation:


"Do you hear that? That horrible sound lurking on those weird frequencies that can only be tapped into late at night when the kids are in bed, Zevon is cranked up in the head-phones to full volume, and all of the chickens are quietly cooing on their perches? What you hear is the gnashing of teeth, the tearing of flesh, and the blood dripping on the floor inside of the hen-house. The foxes are running wild in there, y’all. Republicans are drunk on gore and power and the orgy of absolutism has forced the minority into a frenzy of self-flagellation coupled with the kind of blind-swinging haymakers one sees in a boxing match between two over-the-hill fighters. The best thing the Democratic Party can do in North Carolina right now is realize that there is no Hail Mary blow from downtown that will put the Republicans on the mat. If they ever hope to turn the tide and stop the bleeding in North Carolina they are going to have to settle down and start playing a little chess. There is no money in sitting at the table with your arms crossed and there is no upside to blind belligerence."

Only thing I would add to this tasty stew is the clear demarcation between the NC House (of the slickster Thom Tillis) and the far more radical NC Senate and the twin mushroom clouds of lust for the U.S. Senate arising out of certain egos in both chambers.

How many Republican grandees will dance on the head of that pin? Or go down with the Bomb?