Sorry, Coastal Carolina, But You're Just Gonna Have to Drink This S**t 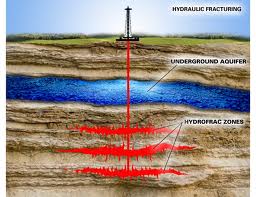 From 1968 to 1972, four miles from Wilmington, N.C., the Hercules corporation, injected some 300,000 gallons of acids and other toxins into deep wells to get rid of them. Industrial waste. Hey! Out of sight, out of mind.

Then it was discovered that those industrial waste wells, "set between 850 and 1,050 feet deep, clogged and leached chemicals into a sand, gravel and limestone aquifer. Monitoring wells in upper aquifers later showed that the chemicals traveled past a clay containment zone and contaminated upper aquifers." The clay in the ground was supposed to stop the leaching of toxins into aquifers. They didn't.

Armed with the knowledge that injecting shit deep into the ground has every expectation of turning drinking water to shit, the NC General Assembly passed a good law banning the dumping of industrial shit into deep wells.

Enter fracking. "Each fracked well requires 3 million to 5 million gallons of water, chemicals and sand to break up the shale rock and release the natural gas." All those millions of gallons of contaminated water have to go somewhere.

The fast-tracking of fracking in North Carolina will destroy that earlier ban, passed in 1973, against pumping toxic shit into deep wells.

The Raleigh News & Observer says today that the 3-5 million gallons of toxic tea from each well is likely going to end up on the North Carolina coast, one way or another. The same region that proved back in 1972 to be highly unreliable for storing industrial carcinogens.

Welcome to the brave new world of Republican rule in North Carolina.

Mr Williamson, you're pretty worked up-- not that I can blame you-- I count 5 "shit"s in the article plus headline. But yeah, this shit is some very shitty shit indeed. Are there no longer any powerful moneyed real estate/development interests in the coastal area any more? I would have thought they would have some leverage, unlike the--oh, dang, what are they called?-- Oh, right, affected taxpayers.

I'll tell you what has happened elsewhere - a private company takes over a water or wastewater system (generally on a promise to run it at lower cost to the ratepayers), runs it for a few years, mining it for every revenue possible while doing no maintenance, then proposes a huge rate increase. At which time, the municipality has to take it back over and pump huge amounts of tax money into it to keep the thing running.

It's a snatch and run operation....like any other street mugging.

If the municipality keeps it, the huge increases in water bills (and sewer bills) also, not to mention tax increases.

No matter who runs it,it takes money "to keep the thing running.

Public resources need to be owned and controlled by the public. We don't need carpetbaggers in charge of our water.

No, we need entrepreneurs and competition to keep the price down.

"No, we need entrepreneurs and competition to keep the price down."