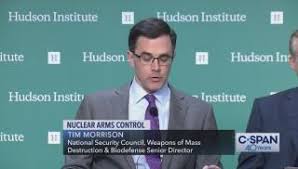 A Reoccuring Feature on Who's Jumping Off Luxury Liner Trump

Tim Morrison, the top Russia official on Trump's National Security Council, who is scheduled to testify in the impeachment inquiry this morning, resigned his post in advance of his testimony. Morrison is considered a "conservative hawk," and he had been working on arms control and biodefense issues at the NSC when he was elevated to the Russia portfolio by Trump's then-national security adviser, John Bolton. Morrison started in the role in July, overlapping with his predecessor, Fiona Hill — another witness in the impeachment inquiry — who had announced her plans to leave the White House in August.

Ambassador Bill Taylor had told impeachment investigators that Morrison had reported to NSC lawyers that unethical demands were being placed on the Ukrainian government by Gordon Sondland.

"He may have more hawkish views, but he still colors within the lines of what is normally the practice of diplomacy," said Brett Bruen, who served as the White House's director of global engagement in the Obama administration. "Tim is an example, like Fiona [Hill], of serious foreign policy people who are having a seriously difficult time navigating the unethical world of Trump's national security structure." [NPR, which first reported Morrison's departure]