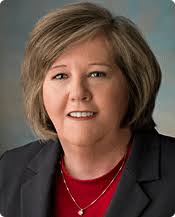 Twitterman has long expressed disdain for Postmaster General Megan Brennan, a three-decade career Postal Service employee who began as a letter-carrier in Lancaster, Pa. She became Postmaster General in 2015, the first woman to lead the agency, and she was protected from presidential spite by the 11-member Board of Governors who actually vote on new leaders of the agency. Recently (this August), Trump appointees to the board achieved a majority, and yesterday Brennan announced her retirement.

Trump has been mad at Brennan because she won't double the rates charged Amazon for the delivery of packages. Brennan has responded that there is an existing contract which cannot be easily broken, and doubling the rates charged to Amazon would directly impact costs to the public.

Trump hates Amazon because of owner Jeff Bezos, who also owns the Washington Post. That newspaper has arisen during the Trump presidency as his chief fact-checker, keeping a running count of the president's lies and misrepresentations (currently over 13,000 enumerated falsehoods since he took office).

So can we look forward to a new Postmaster General who will breach the Amazon contract and bring on higher shipping costs for both shippers and receivers? What could possibly go wrong with that?

Posted by J.W. Williamson at 10/17/2019 08:33:00 AM
Email ThisBlogThis!Share to TwitterShare to FacebookShare to Pinterest
Labels: Donald Trump, Megan Brennan

So many ways the USPS could be more useful, especially to low-income folks. Once they offered banking/savings accounts, which drive out of business scalpers who offer payday loans. They need to stop punishing the PO by requiring contributions to pension funds dozens of years out. Going after the USPS to spite Bezos is just crazy and stupid.