"Impeachment investigators have negotiated in recent days with a lawyer for Mr. Bolton about a date for him to be deposed behind closed doors...."

John Bolton's gonna talk, and when he does Lindsey Graham will need grander theatrics for his next stage act -- bigger painted sets, more flamboyant costuming, good lighting -- cause John Bolton knows everything. And Trump fired him on September 10. If there's a Code Red walking case of acid reflux on this planet, it's John Bolton. 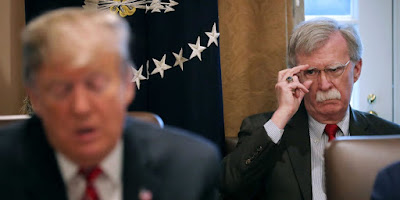 Bolton, who actually possesses a moral center, doesn't back down, which made him a problem for liberals well before he became a problem for Twitterman. Hardliner. Hawk. So he naturally recognizes a hand grenade when he sees one. To Bolton (and to his everlasting credit), Rudy Guiliani looked like a hand grenade with the pin long gone. Bolton knew every grand master chess move that Guiliani and Trump made to extort Ukraine.

1. Bolton told Alexander Vindman, who's being deposed by the impeachment committee today and who was actually on the phone to hear the infamous Trump-Zelensky "do me a favor" call, to draft a memorandum in mid-August that sought to restart $391 million in security aid that was being withheld from Ukraine. Trump refused to sign it.

2. Bolton also told Alexander Vindman, star witness today who's also a current White House employee with the NSC, to draft a letter in May congratulating Zelensky on his inauguration. Trump refused to sign that too.

3. Bolton told Fiona Hill, a former National Security Council official in charge of Russia policy, to "brief the NSC lawyers" to make sure there was a record of her opposition to the shadow foreign policy that was putting pressure on Ukraine for "a favor."

4. Bolton told Bill Taylor, the acting US ambassador to Ukraine, to send a first-person cable to Secretary of State Mike Pompeo that expressed Taylor's assessment that it was "crazy" to extort Ukraine for political purposes.

It's always the paper trail, O my brethren, that eventually nails 'em. And these examples above are no doubt just a fraction of what Bolton was inducing and producing before he got shoved out of the White House.

Mark Groombridge, a former aide to Bolton, gave NPR the most interesting insight into Bolton's character. Groombridge said of Bolton:

"His bureaucratic skills served him very well in that there is now a paper trail, which essentially exonerates Ambassador Bolton and, in some ways, almost paints him as the hero in this. I mean, I recall the first day I joined the State Department — it was Oct. 15, 2001. And the only sort of fatherly advice Ambassador Bolton gave me at the time was, he said, 'Always get the process right. That way those who oppose you are forced to engage you on substance.' And I think Ambassador Bolton, in his capacity as [national security adviser], was doing the same thing."