One of the Good Guys -- Marie Yovanovitch


A career State Department diplomat with 30+ years of experience under six different presidents. She was ambassador to Ukraine whose term was supposed to end this past August, but she was asked in May by Trump's State Department to extend her ambassadorship through August of 2020. That request was suddenly reversed less than two months later in July when Trump recalled her and exiled her to a desk in the Department of State.

Trump was about to call new Ukrainian President Zelensky about a little "favor" he wanted, and Yovanovitch might get in the way.

She had become inconvenient to the scheme that Trump and Guiliani had hatched to make dirt in Ukraine. Her personal honesty and integrity apparently did not mesh well with the business and political ambitions of not only Trump and Guiliani but of other guys like these two below, Parnas and Fruman, two Guiliani henchmen whose previous prospecting in Ukraine did not meet with Yovanovitch's approbation. (Why Parnas and Fruman had it in for her is outlined here. It was all about gas.) 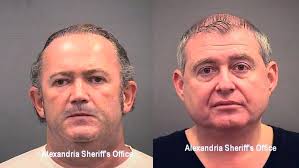 “Although I understand that I served at the pleasure of the president, I was nevertheless incredulous that the U.S. government chose to remove an ambassador based, as best as I can tell, on unfounded and false claims by people with clearly questionable motives,” she wrote in a statement she prepared for the impeachment joint committees.

She chose to testify despite Mike Pompeo's directive, at the direction of the president, that no State Department officials should cooperate with the impeachment inquiry because the Congressional Democrats wisely subpoenaed her early yesterday morning. Yovanovitch's welfare had already been implicitly threatened by Trump himself in his famous phone call with Zelensky: “She’s going to go through some things.” How chilling is that? Yet Yovanovitch is a model for bravery at a time when hundreds of otherwise powerful men have become cowards.