Remember the Date -- July 10, 2019 --"Detonation of the Ukraine Crisis Inside the White House"


Just try to stay up, O my brethren. It's important that we understand the architectural nuances of Trump's impeachable offenses. 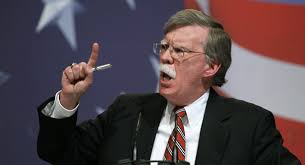 July 10, 2019 -- the date that John Bolton and other White House nat'l security officials discovered just how far the Trump off-books extortion racket against Ukraine had progressed. Keep in mind that during the two full weeks that elapsed between Bolton's Blowup on this date (see below), and the Trump call to Zelensky on the 25th, Trump did not alter his course one millimeter.

July 25, 2019 -- the date of Trump's call to Ukraine President Zelensky, the phone call which prompted the whistleblower's complaint and launched the impeachment.

The Occasion on July 10th

A visit to the White House by Ukrainians Andriy Yermak, who had frequently engaged with key Trump lieutenant Gordon Sondland and other U.S. diplomats; and Oleksandr Danyliuk, the head of Ukraine’s national security and defense council. Col. Alexander Vindman told the impeachment committee yesterday, “The Ukrainians saw this meeting as critically important in order to solidify the support of their most important international partner” (according to a copy of his opening statement released to the public).

Two rooms in the White House were involved in "the detonation of the Ukraine crisis":

Yermak and Danyliuk were ushered into a meeting in Bolton’s office in the West Wing along with Gordon Sondland, Kurt Volker, Fiona Hill, Col. Vindman et al. "The American team was working through standard U.S.-Ukraine talking points, including the United States’ desire to see Kyiv crack down on corruption, when officials familiar with the meeting say Sondland went off script." "Sondland turned the conversation away from ongoing corruption probes to reviving specific investigations that were important to Trump, according to testimony from Hill and Vindman."

Bolton "abruptly ended the meeting." He "ordered" people out of his office (as only an angry John Bolton might do it).

As the group filed out, Sondland pulled the Ukrainians aside and instructed them to follow him to the...

The Ward Room is in the basement of the West Wing and is regularly used for meetings by national security staff.

Col. Vindman tagged along with the Ukrainians, following Sondland to the Ward Room. Vindman in his testimony yesterday said that Sondland immediately pressed for “investigations into the 2016 election, the Bidens and Burisma.” Vindman said he then confronted Sondland in front of the Ukrainians (or later, not in front of the Ukrainians -- it's unclear), saying that “his statements were inappropriate, that the request to investigate Biden and his son had nothing to do with national security, and that such investigations were not something the [National Security Council] was going to get involved in or push.”

Meanwhile, upstairs John Bolton knows about the Ward Room end-run and he sends Fiona Hill, his immediate deputy, down there to take charge of the meeting. Hill enters the room late, hears the word "Burisma," knows what's up, and immediately closes the meeting.

Upstairs, John Bolton is already steaming mad. Hill comes back up to tell him what happened, and Bolton explodes with his now famous line: “I am not part of whatever drug deal Sondland and Mulvaney are cooking up.” Mick Mulvaney, the acting White House chief of staff, had met with Sondland on several occasions to discuss Ukraine.

Bolton directed Hill to report what she had witnessed to John Eisenberg, the top lawyer for the National Security Council. Hill spoke briefly with Eisenberg on that very day, but because the attorney was pressed for time they did not finish their discussion until the next day. Hill was accompanied by Wells Griffith, an NSC official responsible for energy policy who is also being sought as a witness by House investigators.

The Ass Most Immediately Caught in the Crack

Gordon Sondland, who's turning out to be Trump's biggest chump, testified to the impeachment committee that "he didn’t know of any Biden connection in Trump’s demands for a Burisma investigation until much later, after the allegations in the whistleblower complaint became known. He has also said that no White House officials ever expressed any concern to him about his efforts to push Ukraine to commit to the Burisma probe."

At the same time -- in the same testimony -- Sondland also admitted that the Ukraine demands amounted technically to a scratch-my-back-and-I'll-scratch-yours, a.k.a., quid pro quo.

They could charge Sondland with lying to a Congressional committee.

Footnote: Indebted to the reporting of Greg Miller for all the direct quotes