Democrats: Compromising Voter Access to the Polls Is Unacceptable 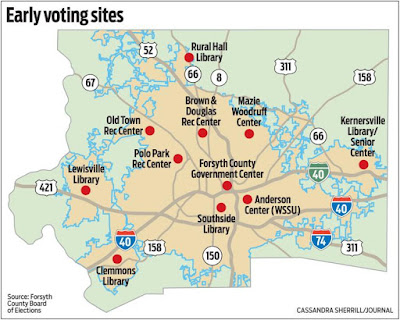 "Good Lord Almighty!" as my grandfather might have said. What were they thinking?

"What the hell!" as any voter today might say, seeing how "compromise" on the Forsyth County Board of Elections is never good news for the voters.

They just want to get along in Forsyth County, so the Democratic majority gave up Sunday voting in exchange for an early voting site on the campus of Winston-Salem State University -- the first such poll on campus since 2010.

Gave up Sunday voting. Got an EV site at WSSU.

Why the Democrats on the Forsyth Board are so prone to compromising away more access to voting for some elusive (and illusory) bi-partisan consensus -- I don't get the weakness of that. I don't understand it. When Democrats finally have a majority on boards of election, they continue to act like underdogs, and complacent underdogs at that.

ONE MORE GRIPE
From the Winston-Salem Journal: "Although Democrats also wanted early voting at the Miller Park Community Center, in the end they dropped that plea." Miller Park Community Ctr. is smack in Ardmore, south of Business I-40, in a neighborhood of very small house lots originally platted for workforce housing from 1910 into the 1920s. Guess who votes there now.

The Forsyth Dems gave up too much. They didn't have to give up anything.

Posted by J.W. Williamson at 10/08/2019 10:30:00 AM
Email ThisBlogThis!Share to TwitterShare to FacebookShare to Pinterest
Labels: early voting in North Carolina, Forsyth County Board of Elections, voting rights