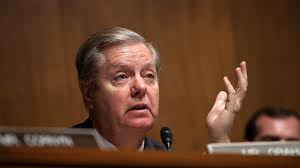 
Republicans unleashed perhaps their most aggressive outcry of the Trump era after he abandoned the U.S.’ Kurdish allies and ceded northeastern Syria to Turkey. But now GOP lawmakers are dialing back their direct criticism of the president....

... while they’re still dissatisfied with the situation, they’ve shifted gears away from confrontation with the president.

“I do appreciate what the administration has done against Turkey through executive action, but more to follow,” Sen. Lindsey Graham (R-S.C.) told reporters Tuesday afternoon, after joining Trump for a phone call with Turkish President Recep Tayyip Erdogan on Monday. “I appreciate the phone calls yesterday with Erdogan, I think [Trump] reached out in a good way to let Turkey know they needed a cease-fire right now.”

It's a good way, according now to Lindsey Graham.

*Indebted to Rick Wilson for the headline.

Posted by J.W. Williamson at 10/16/2019 10:43:00 AM
Email ThisBlogThis!Share to TwitterShare to FacebookShare to Pinterest
Labels: Donald Trump, Lindsey Graham