Forward My Mail To Brazil


News broke late last night that Trump's "own Roy Cohn," Attorney General William P. Barr, has opened a criminal inquiry into the possibility that members of his own Justice Department, including the FBI, ginned up "the Russia hoax" out of personal, "deep state" animus toward his boss.

Trump needs fall-guys to blame, enemies to destroy (that's why he's all over Ukraine too), and he would most especially like proof of disloyalty about a select handful of government employees, starting with former CIA chief John Brennan and including Andrew McCabe at the FBI and Peter Strzok. Don't forget Comey. And throw in Mueller while you're at it. That's what he wants, that's what he demands. And by Gawd, and with the Good Lord's help, William P. Barr will finger 'em!

Never mind the rock cold fact that Robert S. Mueller III secured indictments of more than two dozen Russian military operatives for interfering in the 2016 election. He knows their names. He knows what they did. He knows the actual keystrokes they made on their computers in St. Petersburg to promote Trump and tar Clinton.

But never mind that. Twitterman has made it perfectly clear that he expects the Justice Department to be his battle axe against his political enemies. After all, they're guilty of "treason" -- how many times now has he used that exact word? A most threatening word, because you remember how we treat traitors.


Mueller also said in that report you didn't read that he had “insufficient evidence” to determine whether Trump or his aides engaged in a criminal conspiracy with the Russians but that the campaign welcomed the sabotage and expected to benefit from it.

So when I heard Rachel unspool that Barr news at 9 last night, and then I sat down this morning to read the NYTimes story for myself, I kinda went to "Brazil" in my head. Terry Gilliam's "Brazil" in the 1985 movie of the same name. That "Brazil" is a head trip, a fantasy landscape of escape for our hero from an authoritarian and cruel government. The movie ends with the chief of the Department of Information Retrieval saying to the man doing the torture on our hero, "He's got away from us." And the torturer, holding a scalpel ready to slice, replies ruefully,  " 'Fraid you're right. He's gone."

Escaped mentally. It's the only escape, the movie proposes. 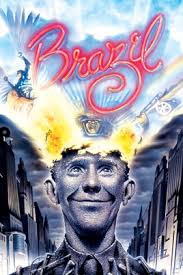 Doesn't Trump and his big pug Barr make you want to take a head trip and never return?