What Was Mark Meadows Thinking? 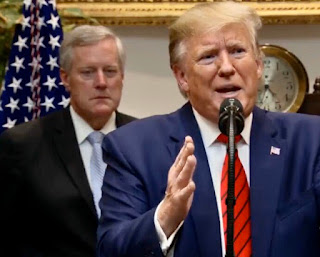 Maybe he was thinking: "I wish I was not standing directly behind this man and in full view of the cameras, while he condemns thousands of our loyal Kurdish allies to a Turkish genocide because they weren't at the Normandy invasion in 1944."

Naw. He wasn't thinking that. He was thinking: "How much farther up this great man's ass can I crawl?"

A great man who says these things, out loud, and in public:

Trump downplayed the alliance with the Kurds, 11,000 of whom died fighting to help the US mission against ISIS. "They didn't help us in the second World War, they didn't help us with Normandy for example," Trump said. "They're there to help us with their land, and that's a different thing." Normandy is an area of France, not the US.


He shrugged off the likely escape of ISIS fighters from Kurdish prisons, essentially saying it is Europe's problem, not his. "Well, they're going to be escaping to Europe, that's where they want to go," Trump said. He added that "we have no soldiers in the area."

Posted by J.W. Williamson at 10/10/2019 08:28:00 AM
Email ThisBlogThis!Share to TwitterShare to FacebookShare to Pinterest
Labels: Donald Trump, Mark Meadows