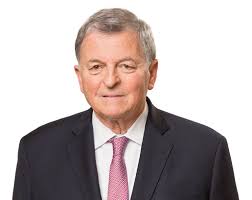 Two weeks ago Rudy Guiliani hired high-powered attorney Jon Sale to head up his legal team. Sale insisted at the time that his new client "100 percent did not do anything illegal.” That odd locution was reported by law.com. Yesterday, Rudy Guiliani announced that he intended to defy all subpoenas -- "I ain't saying nuttin to nobody!" Jon Sale announced later on that same day that, by the way, he is no longer a part of Guiliani's legal team.

Did a few percentage points come off that claim of 100 percent innocence?

Sale himself came up with an implausible excuse, as relayed by BuzzFeed reporter Zoe Tillman: "He said he was brought on by Giuliani for the sole task of responding to Dems' subpoena, and that task is done so the representation is over. This was the plan from the start, he said. He doesn't know if Giuliani has other counsel."

High-priced white-collar-crime specialist is hired for just two weeks to respond "No!" for Guiliani to the impeachment inquiry?  I don't buy it.

Who is Jon A. Sale
He's a leading criminal defense attorney, specializing in white collar crime. He's "of counsel" at the large Nelson Mullins firm in Miami. He is touted on the Nelson Mullins website:

He seems made in heaven for the Rudy Guiliani we've all come to know.

Sale is more widely recognized for his past well known role as an assistant special Watergate prosecutor under special prosecutors Archibald Cox and Leon Jaworski, so you might say he has experience with White House appendages that defy subpoenas.

Posted by J.W. Williamson at 10/16/2019 10:26:00 AM
Email ThisBlogThis!Share to TwitterShare to FacebookShare to Pinterest
Labels: Donald Trump, impeachment, Jon A. Sale, Rudy Giuliani