Gordon Sondland -- A Key Player in the Attempted Extortion of Ukraine. 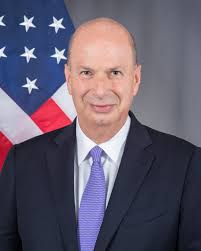 The nine-hour deposition given by former special envoy Kurt Volker yesterday, combined with the trove of text messages Volker turned over to the three House committees heading up the impeachment inquiry, throw harsh light on a particular Trump henchman.

Gordon Sondland of Portland, Oregon, Trump's ambassador to the European Union, bought his ambassadorship by contributing $1 million to Trump's inauguration. Sondland is a wealthy hotel owner (primarily expensive establishments on the West Coast) and -- commendably -- a successful promoter of TV and film production in Oregon -- with no discernible expertise on Ukraine or its neighbors, yet he was in the thick of manipulating the new president Zelensky to do as Trump wanted. Trump's phone call with Zelensky on July 25 was actually far from the first time Zelensky had heard "Do us a favor."

(FWIW Wikipedia includes this interesting nugget: "Sondland initially supported Donald Trump, but cancelled a fundraiser and repudiated Trump for his attacks on Khizr and Ghazala Khan," in April 2017. Apparently, Sondland got over it, and Trump obviously forgave him. Trump nominated Sondland to his ambassadorship in March 2018.)


The whistleblower report mentions Sondland by name and claims he met twice with Ukrainian officials along with Kurt Volker, the State Department’s special envoy to the Ukraine, to help them “understand and respond to the differing messages they were receiving from official U.S. channels on the one hand and from Mr. Giuliani on the other.” The report also mentioned Volker and Sondland advised Ukrainian officials “how to ‘navigate’ the demands that the President had made of Mr. Zelenskyy.” (Jeff Manning, The Oregonian)

Kurt Volker, yes, as special ambassador to Ukraine, but Rudy Giuliani? Private citizen Giuliani? Who was also Donald Trump's personal lawyer? He was leaning on Zelensky's government hard, and Volker (however reluctantly) was trying to help talk Zelensky into doing what Giuliani demanded. Why was Sondland involved? He's Ambassador to the European Union ... and Ukraine is not a member of the EU. What else could Sondland be doing in this other than giving State Department cover for Giuliani the Muscle Man to get the goods?

Giuliani and Sondland didn't just want a Ukrainian investigation into the Bidens; they were also pushing an investigation into "a completely unfounded attempt" to link Ukraine to the hacking of the Democratic National Committee network in 2016. Sondland was insisting that Trump would only be happy (happy enough to invite Zelensky to the White House and release the frozen military aid) when Zelensky publicly announced he was launching a probe that would presumably bury Joe Biden. Volker even drafted possible language for that announcement and shared it with Sondland.

Zelensky Appears To Cave to Trump

Sondland referred to the Zelensky capitulation -- a public announcement of investigations launched -- in almost comic gangster style: “I think potus really wants the deliverable.” For those of you who don't know, that's POTUS with the MOSTEST, who always wants more and more. Does that look like quid pro quo DNA to you?

A little over a month ago -- my! how a month evaporates -- by August 9, following the July 25th Trump-Zelensky smoking gun phone call and assiduous field work by Giuliani, Sondland, and Volker, Ukraine seems to have agreed to Trump's conditions, but Zelensky balked about issuing a public statement first, before the White House had set a date to invite Zelensky to Washington, because (obviously!) the Ukrainians didn't trust Trump (those wickedly worldly Europeans!).

Zelensky aide Andriy Yermak delivered the balking message on August 10 to Sondland and Volker: “Once we have a date [for visit to White House] [Zelensky] will call for a press briefing, announcing upcoming visit and outlining vision for the reboot of US-UKRAINE relationship, including among other things Burisma [the company Hunter Biden worked for] and election meddling in investigations” [the Trump myth that really it was Ukraine that meddled in our election in 2016, not Russia].

That Zelensky announcement never happened, incidentally, nor did the invitation to the White House ever land in Zelensky's mailbox. Somewhere, somehow, everything went ker-blooey.

Sondland Wakes Up To His Criminal Exposure

It was career diplomat Bill Taylor, technically the interim chargé d'affaires in Ukraine which currently makes him the top U.S. diplomat there until Trump nominates someone to take the place of the recalled Marie Yovanovitch -- it was stand-up guy Bill Taylor who made Sondland gulp twice about what they were involved in -- the extortion of a sovereign nation for the benefit of Trump. Sondland's effort to cover his ass is fairly pathetic.

September 1: Bill Taylor, Ambassador to Ukraine: "Are we now saying that security assistance and WH meeting are conditioned on investigations?" Translation: Are we seriously talking quid pro quo?

September 9: After that call, Taylor: "As I said on the phone, I think it's crazy to withhold security assistance for help with a political campaign."

Sondland, in one of the great moments in post-Nixon get-this-on-the-record as a non-denial denial: "Bill, I believe you are incorrect about President Trump's intentions. The President has been crystal clear no quid pro quo's of any kind." Sondland continued, "I suggest we stop the back and forth by text."

If you were Zelenskyy wouldn't you cave to Trump? He doesn't know if Trump might not survive all the opposition and he will likely be in power for the next year +.