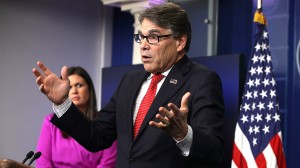 Former Texas Governor Rick Perry, a contender along with Trump in 2016 for the presidency and one of Trump's longest serving cabinet members, will be leaving his post as Energy Secretary by the end of November.

Not known as a rocket scientist, Perry has been implicated in the Ukraine extortion scheme because he attended last May President Zelensky's inauguration (in place of VP Pence). So far no evidence has emerged of his joining the pressure campaign on Zelensky to dig up dirt on the Bidens, but "Robert Menendez of New Jersey, the top Democrat on the Senate Foreign Relations Committee, sent a letter to Perry on Tuesday asking him what instructions Trump gave him when the Cabinet official flew to Ukraine in May, as well as who asked Perry to go there in the first place. And three House committees on Monday issued a sweeping subpoena to Trump's personal lawyer, Rudolph W. Giuliani, in part seeking documents related to Perry" (Dino Grandoni).

Perry will not be missed at the Energy Department. He's been a great promoter of fossil fuels (particularly coal).