Let the Bedbugs Rest: No G-7 at Doral 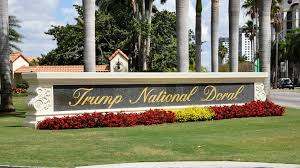 Late yesterday, after he had evidently gotten into his pjs, Twitterman completely caved on his self-dealing, wallet-inflating decision to use his own Florida resort for the next G-7 summit. Naturally, because he is Twitterman, he caved on Twitter:


“I thought I was doing something very good for our country by using Trump National Doral, in Miami, for hosting the G-7 leaders .... But, as usual, the hostile media & Democrat partners went CRAZY!”

“Therefore, based on both Media & Democrat Crazed and Irrational Hostility, we will no longer consider Trump National Doral, Miami, as the Host Site for the G-7 in 2020.”

Our first reaction was "way to go, crazed and irrational Democrats!" But the real source of Trump's ignominious retreat was members of his own party in Congress. Trump's acting chief of staff Mick Mulvaney announced the decision to use the Trump golf resort on Thursday. By Friday, WashPost reporters had interviewed more than 20 GOP lawmakers and congressional aides. "Many said they were repulsed by Trump’s decision to host an international summit at his own resort."

“You have to go out and try to defend [Trump]. Well, I don’t know if I can do that!” steamed a frustrated Rep. Mike Simpson (R-Idaho). “I have no doubt that Doral is a really good place — I’ve been there, I know. But it is politically insensitive. They should have known what the kickback is going to be on this, that politically he’s doing it for his own benefit.”

Instead of "Crazed and Irrational Hostility" from Democrats, Trump might want to acknowledge "Sudden and Uncharacteristic Growing of Testicles by Fellow Republicans."

Posted by J.W. Williamson at 10/20/2019 08:33:00 AM
Email ThisBlogThis!Share to TwitterShare to FacebookShare to Pinterest
Labels: Donald Trump