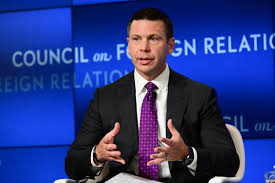 Kevin K. McAleenan, who was until yesterday the acting secretary for the Department of Homeland Security. He had only been in the job for six months. Trump naturally announced the resignation via Twitter and actually wrote that McAleenan "wants to spend more time with his family" (not making that up).

The lack of self-awareness in this president would be much funnier if it were not such a staggering self-parody.

According to a trio of reporters at the NYTimes,

Mr. McAleenan’s departure from the White House came after he tried to embrace the president's increasingly aggressive assault on legal and illegal immigration publicly even as he privately resisted some of Mr. Trump’s most extreme ideas.

A former deputy commissioner for the nation’s border security agency under President Barack Obama, Mr. McAleenan watched in recent months as the White House surrounded him with Fox News contributors to key positions in the agency....