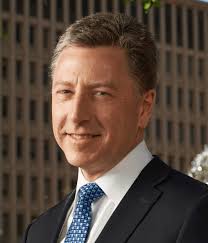 He was mentioned in the whistleblower's filing as one of a couple of State Department officers who were trying to “contain the damage” by advising Ukrainians how to navigate Trump/Giuliani’s pressure to find dirt on the Biden family.

NYTimes describes him as "a widely respected former ambassador to NATO." He was working only parttime as an unpaid special envoy to Ukraine. Yesterday, he reportedly "concluded that it was impossible to be effective in his assignment given the developments of recent days."


Mr. Volker facilitated an entree for Mr. Giuliani with the newly elected government in Ukraine, acting not at the instruction of Mr. Trump or Mr. Pompeo, but at the request of the Ukrainians, who were worried because Mr. Giuliani was seeking information about Mr. Biden and other Democrats and had denounced top Ukrainian officials as “enemies of the president.”

Because Volker reached out to him on behalf of the Ukrainians, Guiliani has used that as the justification for claiming he was always "working for the State Department" when he was skulking around Ukraine.

“Kurt was one of the good ones who went in to the administration to stave off disaster,” said Thomas Wright, a senior fellow at the Brookings Institution. “They all have to speak out now about everything they know and let the chips fall where they may.”

It's always "the good ones" who die first. I've seen that movie before.