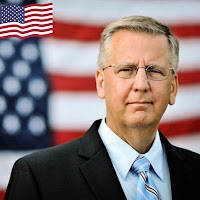 NC state Senator Bob Steinburg is aiming to break all previous records for stupid (and dangerous?) public speech. After the November elections, Steinburg, who represents Senate Dist. 1 down on the coast, wanted Trump to declare martial law and suspend habeas corpus, and he also wanted Chief Justice John Roberts investigated for suspected involvement in the plot to steal the election.

On Inauguration Day, first on Twitter and then in a fulminating video posted on Facebook, Steinburg offered new provocation: “This election was stolen – no one – no one will ever convince me otherwise," he wrote on Twitter. "I, like many of you, probably 75 million or more of you, who do not believe that Joe Biden actually was elected” -- the very first words uttered in the video.

He's a nasty piece of work, this senator, staking his reputation (and his sacred honor) on the big lie. But here's the question: Does he actually believe the lie that Trump was defrauded out of a second term, or is he merely posturing to gild his popularity with the Trumpists? That is to say, is he ass or idiot? And which would be preferable in a duly elected public official, especially a state senator?

Steinburg's Inauguration Day project was shocking enough that WRAL reporter Travis Fain reached out to other Republican senators, including Senate President Pro Tem Phil Berger, to see if they would defend Steinburg. Most ducked the question.

WRAL News reached out via email Thursday morning to all 27 other Republicans in the state Senate, seeking to determine how widespread these beliefs may be. None responded, beyond a statement from Senate President Phil Berger's office: ... "We are not in the business of policing the speech of other members, who are responsible only to the voters who elected them."

Berger's spokesman then went on to write out the indisputable facts that Trump had appropriately exhausted all his legal options and that no evidence of fraud had been proven in any qualified court (including ones presided over by Trump appointees) and that therefore Joe Biden was and is the duly elected president.

All of that quiet put-down of Steinburg communicated via email. Fain wasn't satisfied. He placed personal phone calls to some seven Republican senators. Only one of them would talk to him about Steinburg -- Sen. Warren Daniel of Burke Co., who said, "I’m a lawyer, and I’d like to see evidence before I take a position on an issue.” Meaning, precisely, that anyone who believed as Sen. Steinburg believes might just be an idiot. "We need to move on."

There's the split in the NC Republican Party, such as it is, the clown-show of Trumpist cheerleaders on the one hand (and don't forget Madison Cawthorn in the NC-11), overwhelming the weak signal from sane and traditional Republicans rapidly falling out of love with Trump. There'll be no Trumpist purge in the NCGOP, mainly because Trump won the state (so no need for reprisals), though we've witnessed a minor wave of volunteer defections. In the week following January 6, some 2,879 Republicans re-registered as Not Republican (many if not most, Unaffiliated) in North Carolina. Steinburg (and Cawthorn) don't stem that tide.

I had a run in with Steinberg at my school staff meeting in September. When I asked him about teacher pay, he proceeded to tell me how much they had done for teachers, and that "He works harder than I do." I promptly walked out of the meeting and he went on a rant for over 5 minutes saying I would pay for walking out of the meeting and disrespecting him. He posted his rendition of what happened on Facebook. It was filled with exaggerations and embellishments. I know firsthand what an ass he is.

Steinburg is an awful person. He will attack you personally and then block you when you respond. On his Senate page, where he can’t block constituents, he’s rude and immature in the comments section and will remove comments he doesn’t like quietly when he thinks no one is paying attention. That along with defrauding Currituck County out of $50,000 in advertising fees for his advertising company, I’m shocked he was able to win his election.

About a month ago I emailed Senator Steinburg begging him to provide evidence of his “stolen election” claims or stop making public declarations about the lack of integrity in the electoral process. I tried to remind him of the power of his words and the influence of his office. Granted, I wasn’t as cordial as I should have been, but I can assure you I was much kinder than my not so better angels were rooting for. After several emails back and forth, after being called a “hater” and not “worthy” of his time, unbeknownst to me, me eleven year old daughter took to the power of the pen and wrote him of her own volition. She asked for evidence, she asked why it was so unbelievable that Biden had won, she expressed her sadness and dismay. His response? Something to the effect of, “you will learn in time.” What is that? No acknowledgement that a young person was politically engaged, no encouraging words, not even any kindness. And of course, no compelling argument or even persuasive theory as to why or how the election was illegitimate. He is a dangerous combination of entitled ass and misguided idiot.

I disagree with the premise of your question. The Senator is quite clearly both an ass and idiot.

Selling him short as he is both...